On Sunday, the Democratic presidential candidate Joe Biden released the following statement on Twitter after an apparent Trump supporter was shot to death in Portland: “The deadly violence we saw overnight in Portland is unacceptable. Shooting in the streets of a great American city is unacceptable. I condemn violence of every kind by anyone, whether on the left or the right. And I challenge Donald Trump to do the same.”

For about three months, violent demonstrations have engulfed the city of Portland.

The Dems have a few good to great speakers on their bench for 2024. Specifically Michelle Obama and Susan Rice. Both are very good at what they do and never coming off poorly like Harris, Biden, and many others. For R’s they have Nikki Hailey, Dan Crenshaw, and Tim Scott.

I am imagining a Gabbard/Crenshaw ticket thinking,
"why can't we have a better choice than Biden or Trump?" What I don't like about Gabbard, I like about Crenshaw and vice versa. Wouldn't that be nice, @BretWeinstein? @articlesofunity #unity2020

Congressman Dan Crenshaw (R-TX), who lost an eye to an IED while serving in Afghanistan, shot back at Biden, “Too little too late. The left wing militants have been at war in America’s cities for MONTHS and you’re only commenting now because the polling told you to.”

On Saturday, Axios reported, “In a Marquette Law School poll of registered voters in battleground Wisconsin, support for Black Lives Matters protests dropped 13 points from June to August, just ahead of the police shooting of Jacob Blake in Kenosha.”

On August 26, The Federalist noted, “CNN anchors Don Lemon and Chris Cuomo spoke out about the violence in Kenosha, Wisconsin Tuesday, providing a stark contrast in CNN’s previous coverage and analysis of the sustained riots in cities around the nation. Lemon and Cuomo cited polling as the main reason why rioting should now be acknowledged as something more than ‘peaceful protests.’ ‘It’s showing up in the polling. It’s showing up in focus groups. It is the only thing right now that is sticking,’ Lemon explained.”

This is not Crenshaw’s first fierce critique in Biden.

Biden criticized President Trump on Twitter in March over his ban on travel to the United States, and for his efforts to build a wall on the southern border, writing, “A wall will not stop the coronavirus. Banning all travel from Europe — or any other part of the world — will not stop it. This disease could impact every nation and any person on the planet — and we need a plan to combat it.”

That triggered Crenshaw, who launched back a tweet obliterating Biden’s argument. Crenshaw wrote, “First, walls quite literally stop a virus. It’s kind of the whole point of a quarantine, for instance. Second, assuming you meant this metaphorically, health experts like Dr. Fauci and everyone else agree travel restrictions have vastly slowed the spread of the virus in the US.”

Early in April, Valerie Jarrett, senior adviser to former President Barack Obama, and someone credited with exerting immense influence behind the scenes, blasted President Trump over his treatment of the coronavirus epidemic while giving his own hagiographical depiction of Obama, writing, “Someone asked me today how would @BarackObama have handled this crisis? Answer in one word – better. Ok, two words. Much better.”

Crenshaw: Dems shouldn’t intentionally divide the country during a pandemic 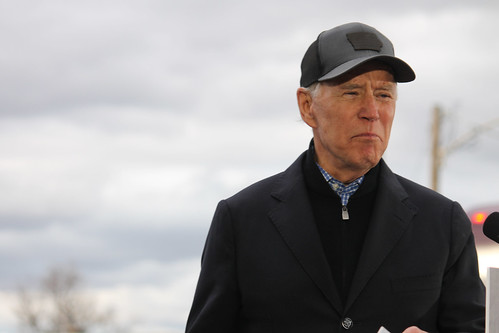 Crenshaw was evidently upset by the fact that, while people were dying in droves, Democrats took the opportunity to place party politics above American unity. The Congressman tweeted, “Why do so many Obama administration staffers constantly try to make Americans feel awful? Highlighting policy differences is expected — but this level of vitriol? During this pandemic? Why?”

Crenshaw is a retired Lieutenant Commander with the U.S. Navy, and was once a Navy SEAL. According to the “about” section of his campaign website, he “graduated from Tufts University in 2006, where he earned his Naval officer commission through Navy ROTC.”He immediately reported to SEAL training after graduation, where he excelled, and was then deployed to Fallujah, Iraq — the first of five tours serving his country overseas.

He lost his eye during his third deployment.