“Police Car in Dallas” (CC BY 2.0) by JobsForFelonsHub

Don’t mess with Texas. When Renee Hall, Chief of the Dallas Police, warned protesters “If you break the law, we will arrest you” she meant it. When protests in Dallas inevitably got a bit rioty, Hall’s people booked no less than 700 of the instigators within a short period.

647 rioters were put in disposable nylon cuffs and arrested while they tried to block the Margaret Hunt Hill Bridge. No charges have been made.

Dallas police: strict but kind, no charges made

‘We Warned Them’: Dallas Police Chief Had Nearly 700 Protesters Taken Into Custody For Blocking Highways
Last month, Dallas Police Chief Renee Hall had nearly 700 individuals taken into custody and hit with at-large arrest charges after they blocked a major highway in the city.

Hall had no qualms about taking credit for the mass arrest. At a press conference afterward, She told reporters she personally ordered the arrests. Hall emphasized that the rioters had been duly warned that this is exactly what would happen, “We warned them. If you break the law, we will arrest you.”

Hall continued, “There are many who question and are not happy with the decisions that I made on yesterday. Let me be clear, I am not here to make people happy. My job and our job in law enforcement is to keep this city safe. We have pledged that. We will do that. And that is our goal.”

She elaborated, “Although peaceful, the protesters broke the law. On last night, they assembled and then they began to walk, and we supported that walk. When they began to enter the Margaret Hunt Hill Bridge they were given a warning because it is against the law.”

Hall outlined the charges, noting, “The penal code 42.03, obstruction of a highway or passageway, says they are not allowed to walk in the middle of the roadway or freeway or overpass.”

Hall noted that during the incident, the rioters were warned to stop blocking the Highway but “They did not stop. They decided to take a knee on the bridge and hold their hands up and say, ‘Don’t shoot!’”

Hall emphasized, “Again, no one should be surprised because my statement is, if you break the law, we will arrest you,” Hall stated. 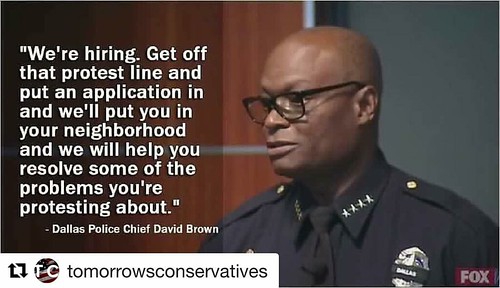 “#Dallas #DavidBrown #police #america #us” (CC BY 2.0) by JenTravelsLife

Similar recent standoffs between police and protesters have ended differently. Protesters in Rochester, New York, blocked a highway last Sunday. Although the protest was anti-police in nature, police officers were on-site to provide protection for the rioters. No one was arrested.

At the beginning of July, two protesters blocking a highway in Seattle were hit by a sports car and one died. Although the driver was an immigrant from Eritrea, members of the BLM movement, referred to him as a white supremacist and claimed he hit the protesters intentionally.