Dems push to steal your vote with mail-in ballots

The Democrats are getting desperate, and it’s hard to blame them. Come November, they will be pitting Biden, a senile serial sex offender against an incumbent with a track record of defeating all opponents and attacks. Realizing what odds they face, the Democrats are, as usual, turning to dirty dealing under the guise of mail-in voting.

Vote-by-mail is essential to protecting the future of our democracy as we confront this public health crisis. There is no legitimate argument against enacting it. #LSSC pic.twitter.com/WPgOgIivK0

House Speaker Pelosi argues that there is no argument against mail-in voting. History says otherwise. In the 2016 and 2018 elections, 16.4 million Americans were disenfranchized when their ballots went missing. Voting by mail means far less oversight. You don’t have to show your ID and representatives of the candidates are not present at every step of the process.

In the years after America was founded, there was no photo ID and no anonymous ballots. Voters presented themselves and voted openly. Their faces were ID enough.

Trump draws a line in the sand over mail-in voting

When asked about the Democrats’ sudden passion for mail-in voting, President Trump responded, ” think a lot of people cheat with mail-in voting. I think people should vote with voter ID. I think voter ID is very important. And the reason they don’t want voter ID is because they intend to cheat.”

A chorus of globalist cronies for mail-in voting 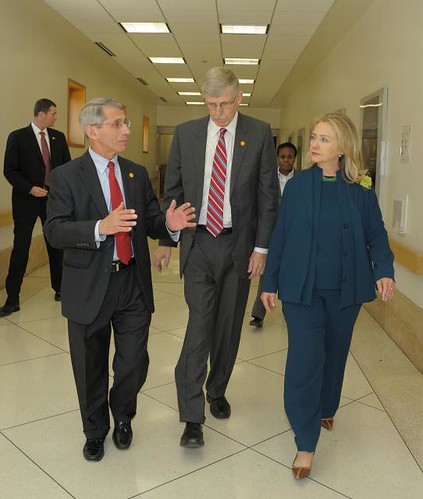 “Secretary of State Hillary Rodham Clinto” (CC BY 2.0) by NIAID

The Brennan Center for Justice has put forward another unaccountable voting system, drop boxes, again with no ID required. The center is heavily financed by George Soros, one of the Democrats’ most prominent and vocal supporters.

What prerogative those behind the Iowa Democratic primary debacle have to recommend voting reform is a mystery.

National Institutes of Health Director Doctor Fauci has chimed in with doubts that it will be safe to vote in person in November. President Trump recently called for Fauci to be fired due to his missteps in handling the coronavirus pandemic. Fauci has long-standing ties to Hillary Clinton and to Bill Gates’ business interests in profiteering off ineffective vaccines.

Hillary and Obama have also called for mail-in voting. The CARES pandemic relief act has already led to the greatest transfer of wealth from the American taxpayer to private financial institutions in history. Now, the Democrats are pushing for a step towards the appropriation of political power from the voting public.

Meanwhile, the existence of the US Postal Service is currently under threat. Are we to entrust UPS and FedEx with our democracy the way we have entrusted Google and Facebook with our privacy?