Do the Feds need permission to re-establish law and order?

Chad Wolf, the acting Homeland Security Secretary declared that the department he leads does not require permission from city or state leaders to protect federal buildings anywhere in the nation.
Wolf gave an interview to Fox News on Monday in which he blamed state leaders for failing to provide law and order amidst the ongoing nationwide riots and protests. He said it was their failure that necessitated the recent deployment of DHS agents to federal buildings, particularly a courthouse in Portland, Oregon.

Chad Wolf: Individuals attempting to set fire to a building are not protesters. They are criminals.

DHS Sec Chad Wolf at a briefing is defending the use of DHS officials to arrest protesters in Portland. He says they are there for two reasons: 1) “violent criminal activity” for 52 days 2) “lack of action” from city law enforcement

Oregon Gov says there is no need for them. pic.twitter.com/1BbF8odBbi

Wolf said that state leaders have “fostered this environment that allows these individuals to attack the courthouse. I don’t need invitations by the state, state mayors, or state governors to do our job. We’re going to do that, whether they like us there or not. That’s our responsibility.”

The protests in Portland have been ongoing for over 50 days, with some federal buildings suffering damage. Nationwide, the number of people, including children, young mother Jessica Whitaker, and black ex-police chief David Dorn, killed by so-called protesters, has undermined the rationale of the protests for anyone paying attention.

The Department of Homeland Security has declared that “Each night, lawless anarchists destroy and desecrate property, including the federal courthouse, and attack the brave law enforcement officers protecting it. This siege can end if state and local officials decide to take appropriate action instead of refusing to enforce the law. DHS will not abdicate its solemn duty to protect federal facilities and those within them.”

Concerns over legality of deploying federal agents cooked up 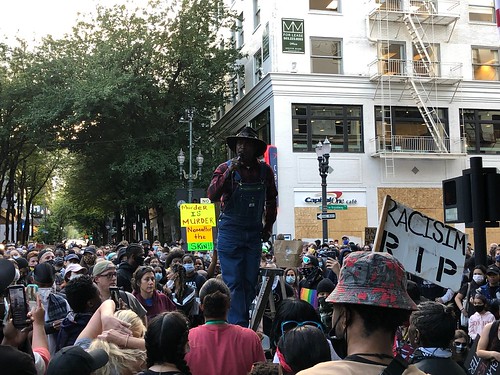 “Anti-Police Brutality and Racism Protest” (CC BY 2.0) by natcounterpunch

Some commenters have voiced concerns that the deployment of the DHS may not be lawful. Video of protesters being removed from the vicinity of a federal building in an unmarked van has created a rallying cry for the protesters and their supporters.

However, US Customs and Border Protection has openly taken responsibility for detaining the protesters, “suspected of assaults against federal agents or destruction of federal property.”

On Friday, Oregon Attorney General Ellen Rosenblum sued the DHS, claiming that it had detained protesters without probable cause.

Appearing on CNN on Sunday, Portland Mayor Ted Wheeler accuse the DHS of “sharply escalating the situation . . . their presence here is actually leading to more violence and more vandalism.”

On Monday, President Trump said he was ready to deploy additional federal agents to stop rioting and re-establish law and order. Currently, the DHS is gearing up to send about 150 agents to Chicago, which is also in the midst of a breakdown of law and order.