DOJ launches investigation into whether riots are centrally coordinated

The Department of Justice has launched an investigation into whether the riots and protests spreading across the country are subject to “coordinated command and control.”

Officials across the nation dealing with the riots have started to notice a pattern suggesting a commond hierarchy behind the violence and looting. Police in many American cities have confirmed that strategically placed piles of bricks and rocks have appeared in their cities. The rioters also appear to have their own recon system with scouts directing the mobs away from the police. Such organizers and scouts are rarely known to the local ‘protesters’ that they are leading. 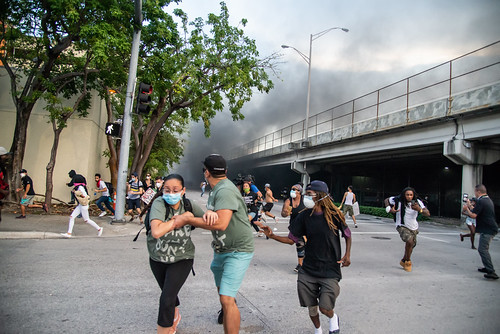 Altogether, the evidence that the protests are being coordinated from some central authority is so convincing that the DOJ has launched a formal investigation.

A senior DOJ official has announced that, “You see the hallmarks… We’re trying to see if there’s a coordinated command and control, you see those bread crumbs and that’s what we’re trying to verify.”

The coordinators of the riots have prioritized the nation’s major urban centers like New York. NYPD leadership has reported that, “caches of bricks & rocks” have been found at key locations across the city. NYPD Commissioner Dermot Shea has tweeted, “This is what our cops are up against: Organized looters, strategically placing caches of bricks & rocks at locations throughout NYC,” Shea noted that bricks have been stolen from various construction sites around the city. NYPD officers have also been assailed with water bottles filled with cement.

Meanwhile, organized teams of looters with power tools are systematically burglarizing business after business in NYC. One New York resident reported witnessing the high level of organization and planning displayed by the looters.

The DOJ is hoping to use wireless communications signals and social media to track down who is coordinating the violence and destruction of property.

The name of one loose organization, Antifa, has been bandied about a lot recently. Antifa started out in Europe opposing racism among that continent’s fanatical soccer fan clubs. Since then, it has received funding from George Soros, the billionaire investor who personally brought the British Pound and economy to their knees in 1992. Soros started out in business as a teenager helping the Nazis appropriate property from his fellow Jewish Hungarians during WWII. His Open Society Foundation is largely responsible for engineering the modern left by deciding who has enough funding to have their voice heard.

There should be a DOJ investigation into just how much Soros money went to funding these riots.