Five teenagers in Auburn, Washington, have received the Sheriff’s Medal of Heroism after they intervened to protect a police officer from a violent attack. King County Sheriff Mitzi Johanknecht awarded the medals last week. Introduced to “honor community members who do extraordinary things,” this is only the second time is in its history that the honor has been awarded.

King County Sheriff's Office
on Tuesday
Last evening, 8/3/2020, Sheriff Mitzi G. Johanknecht, along with Auburn Police Chief O'Neil, presented 5 teenagers with the Sheriff's "Medal of Heroism" Award. These young men stepped in to help our Deputy who had been put in a chokehold

The teenagers were each given the Medal of Heroism Award by King County Sheriff Mitzi Johanknect for their actions that quite possibly saved the life of a deputy.https://t.co/MPn4DqIwF9

The officer, Deputy Elliott, was not on duty at the time of the attack, according to local news KCPQ-TV.
The police department posted on Facebook that, “We cannot thank these five young men enough for coming to Deputy Elliott’s rescue. They quite possibly saved her life. Moms and Dads, you should be proud of these kids!”

The King County Sheriff’s Office has described how Elliott was driving home from work in her patrol car around 1 a.m. on July 18 when she came across a multiple-car collision.

Elliott responded to appeals for help and checked the well-being of those involved in the collision. When the apparently-drunk man responsible for the collision tried to leave the scene, Elliott detained him with a chokehold while calling for backup.

The police department described how, then, “suddenly, the suspect wrapped his arms around Deputy Elliott’s neck, put her in a headlock and began squeezing. She struggled to get out of the hold but thankfully did not lose consciousness.”

That was when the teenagers sprung into action, forcing the man to release Elliot and subduing him, allowing Elliot to arrest him. Elliot suffered no injuries of note.

Attacker had multiple warrants out for his arrest 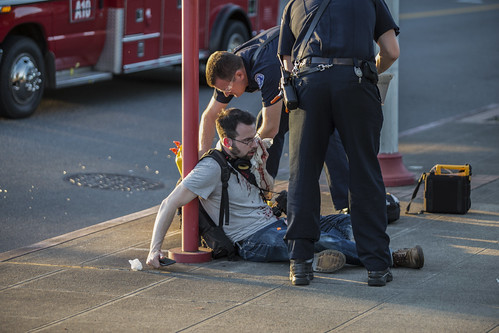 The five teenagers were presented with their medals on August 3 in a ceremony organized by Sheriff Johanknecht and Auburn Police Chief Daniel O’Neill.

The department noted, “We can’t thank these fine young men enough, they are true heroes.”