How Detroit Police Have Prevented Rioting

“Could use a little more of this these da” (CC BY 2.0) by longhairbroad

The rioting and unrest that has swept the nation over the last two months have been largely concentrated in some of our whitest cities, like Seattle and Portland. Meanwhile, in predominantly black Detroit, the police have stood firm and maintained law and order.

James Craig, Detroit’s chief of police, gave an interview on Tucker Carlson Tonight last week to explain why predominantly black Detroit has avoided the mayhem seen in Portland or Seattle.

Carlson noted that “Rioters there have not looted or destroyed a single business in the city of Detroit,” before asking Craig to explain how he managed to achieve that.

from #GAB (yes, great show again by #TuckerCarlson)
Proud of #Detroit (FOR A CHANGE)!

"One thing I learned from my time in Los Angeles, we just don't retreat here in Detroit, we're just not gonna do it."#Tucker #TuckerCarlsonTonight

Craig’s simple response was that “We don’t retreat here in Detroit. We’re just not going to do it.”

Craig went on to note, “I saw what it was like after Rodney King in Los Angeles” and “you saw streets where there was lawlessness, looting, burning, no sight of police officers.”

Detroit has been through enough, and Chief Craig said the city refused to make the same mistake as other cities, allowing vast property damage to occur, in his words, “We weren’t giving up ground to the radicals.”

Craig praised the citizens and police officers of Detroit for their refusal to put up with a group of “misguided radicals who have tried to incite violence in our city.”

“When you talk about what’s different here, we have a city that has stood together,” he said.

Craig also praised Mike Duggan, the mayor of Detroit, saying that he “stands with this police department.”

Some cities refuse to give in 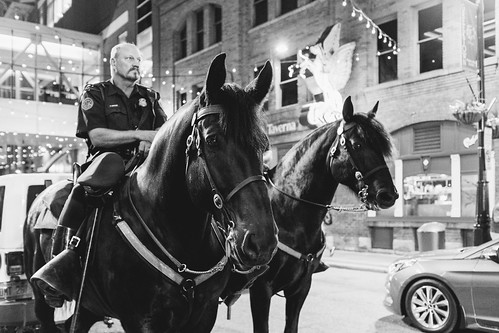 Detroit is not the only major city to have resisted pressure to make compromises with the rioters. At the height of the rioting, San Diego, California, another white-minority city, increased the funding for its police department despite the demands of the BLM movement. One San Diego activist attending a civic meeting on the issue referred to the police force as a “city-sanctioned militia that is terrorizing black people” and “thugs wearing a badge.”

The Republicans have already delivered on the law and justice reform that Obama failed to provide. The liberal establishment keeps trying to browbeat the nation into conformity to its interpretation of moral superiority. It didn’t work with Clinton’s ‘deplorable’ epithet in 2016, and it isn’t working now with ‘defund the police,’ at least in cities that know what a lack of law and order means. As Carlson pontificated, “Violence, like appendicitis, doesn’t go away just because you ignore it. It tends to get much worse. There’s only one thing that stops it and that’s policing.”