Jenny Durkan, the Democratic mayor of Seattle ordered the police to shut down the CHAZ/CHOP anarchist squat only because President Trump was about to beat her to the punch. On Thursday, during an interview with Sean Hannity, Trump said that he had forced Durkan to re-establish law and order in the streets of Seattle. The anarchist squat had prevented police and other emergency response personnel from reaching victims within their ‘zone,’ while causing Seattle’s violent crime rate to jump about 530%.

19-year old Horace Lorenzo Anderson Jr. was shot and killed in Seattle's CHOP. On the day of the funeral, President Trump called his father.

"Whatever your politics are, that doesn't matter … To be able to receive a phone call from the president—it gets no higher than that." pic.twitter.com/yB01VvTlx9

Trump explained the end of CHOP in interview with Sean Hannity

President @realDonaldTrump discloses on Hannity that he was set to go in to dismantle CHOP, and that’s the only reason Seattle moved first.

Things are happening behind the scenes that aren’t always reported immediately. Be assured—POTUS is working for the People!

Hannity asked the president, “I had a source that told me, I was not able to confirm it, that one of the reasons that the Seattle mayor finally acted is that they were given notice that if they didn’t act that you were going to. Is there any truth to that?”

Trump added later that, “We were all set to go into Seattle. Quite frankly, I looked forward to it.”

Trump had pushed Durkan and Washington state’s Democratic governor Jay Inslee to restore the law and order that local property-tax payers had paid for and had a right to. The Democratic lawmakers argued that to do so would somehow be “illegal and unconstitutional” Durkan referred to the violent squat a potential “summer of love” before the violence threatened to spread and endanger her. 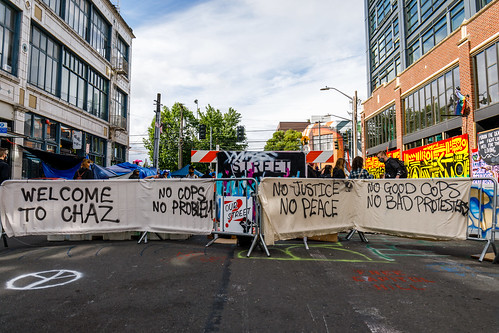 Various residents and businesses in Seattle are suing the city because local lawmakers have failed to protect their rights, particularly the right to law and order. The Democrats nationwide appear to be coordinating from the divisiveness and disorder that has swept America. Partisan politics and leftist tactics verging on Jacobin terror should take a back seat to seeking reconciliation and understanding between American citizens of various backgrounds and viewpoints.

Until now, it appeared that Durkan had broken up CHOP after a few people were shot dead by the protesters. Unsurprisingly, that wasn’t enough for the Democrat, pressure from the president was necessary after all.