Is Biden slipping mentally? Here’s what the nation thinks

Zogby International has polled Americans on whether or not they believe that Joe Biden is suffering from dementia. The question went out to 100,7 ‘likely voters.’ The results show that 55% of respondents believe that Biden, now 77 years old, is suffering the early stages of dementia.

Here's something weird. It's been 76 days since Joe Biden held a press conference. It was April 2 and he only took 4 questions. Hillary Clinton was talking to us a *lot* at this point in 2016. And of course Donald Trump ran us ragged with Q&As. https://t.co/GL1tPzsUt8

1988 Biden had a cranial aneurysm burst. 2019 during a town meeting his eye filled up with blood. Now he spaces out, forgets what he says or what was asked. Recent speech saying a word three times. He is showing early signs of Dementia. Your health issues say retire Joe. pic.twitter.com/SCqtc5PQPc

About 60% of voters in early adulthood, from the age of 18 to their mid-twenties believe Biden is starting to suffer dementia, while 50% of voters over 65 believe the same.

Respondents living in urban areas were more likely to believe that Biden is experiencing the onset of dementia than those who live in the Suburbs. 61% of likely voters who live in medium-sized cities and 62% of men in urban areas believe Biden has dementia, while 52% of respondents from the suburbs and 49% of suburban women shared that belief

Trump says Biden should be in a home 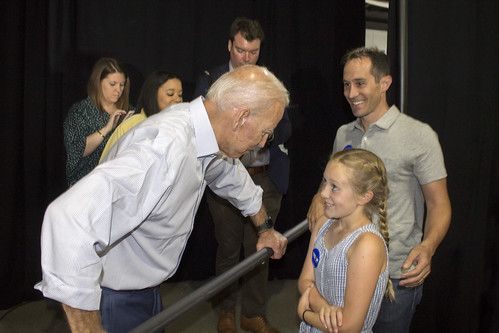 President Trump, who is 74, likes to refer to Biden as ‘sleepy Joe,’ as the presumptive Democratic nominee struggles to form sentences in most of his appearances and tends to commit gaffs when he does. Trump has suggested that Biden should be put in a home and spared the rigors of campaigning while coming to terms with his mental decline.

Biden has sought to laugh off the reports. However, Democrats have recognized that Trump’s online and social media strategy is far more advanced than Biden’s.