A violent brawl erupted in Denver on Sunday when an anti-police mob led by the Party for Socialism and Liberation attacked a yearly pro-police rally.

After the incident, Ron MacLachlan, the founder of the pro-police rally, appeared on local TV news with serious head injuries. He said, “Some guy hit me with a skateboard or something else across the face and another guy came down on top of me with something.

Any update on the charges against the violent criminals who assaulted peaceful, pro-police citizens who had their rights violated? There were charges, right? ⁦@PatrickForCO⁩ https://t.co/lUKatg19nE

Vicious assault led by ‘the Party of Socialism and Liberation’

Yesterday @michellemalkin was viciously attacked by BLM and Antifa at a pro-police rally in Denver while the police, ironically, stood back and watched. This is the new normal: the laws are enforced against the law-abiding while violent criminals terrorize with impunity. https://t.co/JwrypxIh5W

There’s nothing peaceful about these people, they come down scream, get in your face. The number of fights that they start is ridiculous.”

Like some snot-nosed schoolchildren, the mob first tried to ruin the event, which included a live band, by yelling obscenities and making noise with drums, whistles, and pots. Police officers tried to separate the two crowds by forming a line between them, but there weren’t enough of them to fully keep the crowds apart. That’s when the violence started.

One of the organizers for the Party of Socialism and Liberation, Lillian House, claimed that the mob’s counter-protest was necessary, as to them, celebrating the police and the law and order they provide is “unacceptable” in some unqualified, universal sense.

Adina Chapman, a resident of Colorado Springs, made the trip to Denver just to show her support for the law enforcement community. “I’m not saying there doesn’t need to be reforms but if we don’t have police, we don’t have safety,” she said.

Ken Cuccinelli, Acting Deputy Homeland Security Secretary, commented on the incident, referring to the mob’s attack on the peaceful event as “Outrageous violence.” Cuccinelli tweeted, “These tyrannical, left-wing anarchists hate free speech. If you do not agree with them, they believe you must be beaten down – literally.”

The strange evolution of the far left 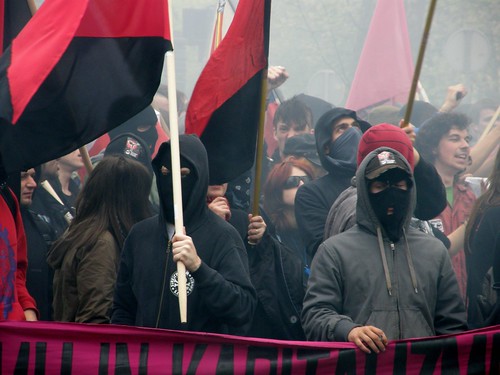 If leftists abhorred prejudice they would not categorically condemn police officers and they would have more to say about the BLM protesters who have murdered various people, including children, over the last month.

A hundred years ago, leftists called for the world to unite across all racial and ethnic lines. ‘The working class has no nation,’ they argued. That brand of leftism collapsed when the parties proclaiming it betrayed their own ideals to support their nations in waging the First World War, leading to 40 million deaths. The war was exploited from the beginning by the globalist agenda.

Many know that Germany sent Lenin to Russia in a sealed train to get Russia out of the war, fewer know that by the end of his life, the useful idiot had lost faith in the cause. When will today’s useful idiots do the same? Perhaps today’s leftists are more straightforward than their antecedents in promoting division and conflict when, if anything, America needs unity and reconciliation.