Residents of Illinois, often former gun-rights skeptics, are thronging to become gun owners in the wake of the mass unrest that has swept the nation. Illinois has a 72-hour background check for all gun buyers, but in recent days the wait period has stretched to more than a week for many.

The Illinois State Police is averaging around 94 business hours, meaning 9-5 Monday to Friday, holidays not included, to process background checks.

The agency is also in charge of issuing concealed carry licenses and ID cards to gun owners. Their workload spiked to an all-time high this month.

A lot of liberals have been buying guns lately.

Gun owner applications up 500% in Illinois

It’s not just conservatives who own guns anymore. Since the riots a lot of Democrat Party liberals are quietly buying up firearms, esp. liberal females, ignoring their own past rhetoric against guns & private firearm ownership. The gun debate is over and 2nd A advocates have won.

In the first half of June, over 42,000 applications for Firearm’s Owner ID cards were submitted compared to 7,000 in the same period last year. Many gun stores are open by appointment only.

Apparently, as soon as the Molotov cocktails start flying, liberals stop teaching the world to sing and rush to the gun store. Ammo is selling out fast, too.

About half of current gun buyers hitting the sporting shops in Illinois are first-time gun owners, and about 40% are women. Many are progressives who have spent their lives supporting gun control policies at the state and federal levels. When the rubber hits the road, securing life and property for themselves and their family trumps abstract political fancy.

One progressive first-time gun buyer recently told the Chicago Tribune that “My views have recently changed, and I have accepted that the Second Amendment provides for the personal ownership and use of a firearm . . . the pandemic and dramatic rise in unemployment, and the more recent social unrest because of the way we police in this country have all been reasons that have prompted my recent application.”

Liberals getting into guns without telling their friends 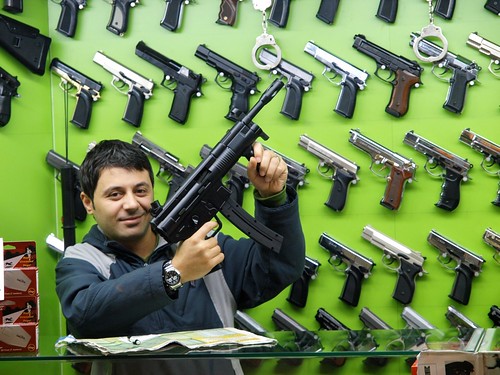 Others are enrolling in concealed carry courses secretly so their liberal friends don’t learn of their heresy. A major category is liberal women who, until recently, were vehemently in favor of gun control. Suddenly swept by a feeling of vulnerability, many such women are flocking to gun ownership in Illinois.

Experts note that simply owning a gun does not make you safer. Without training and practice, owning a gun can be more of a hazard to the owner rather than a protection. First-time gun owners are strongly recommended to spend as much time as possible at a shooting range getting comfortable with their weapon.