The top US commander in the Middle East declared Wednesday in Baghdad that by the end of this month 2,200 U.S. troops would withdraw from Iraq.

The announcement was made by Marine Gen. Frank McKenzie alongside the Iraqi Defense Minister as an indication that the decision to reduce troops was taken in consultation with the Iraqi Government.

“The United States has decided to reduce our troop presence in Iraq from about 5,200 to 3,000 troops during the month of September,” McKenzie said.

Trump: “We are getting out of the endless wars”

Iraq will take more responsibility for its own security

US President Donald Trump will soon announce the withdrawal of more troops from Iraq and Afghanistan, a senior official in his administration said on Tuesday. https://t.co/HPQWGXWEJh

“This reduced footprint allows us to continue advising and assisting our Iraqi partners in rooting out the final remnants of ISIS in Iraq and ensuring its enduring defeat,” he added.

The long-planned decision means that in the next three weeks more than 40 percent of U.S. troops will be leaving Iraq.

Wednesday’s withdrawal announcement was a joint move between the Pentagon and President Trump, who vowed to leave “endless wars.” Trump targeted Democratic critic Joe Biden for his 2002 vote in favor of the Iraq war.

“Unlike previous administrations, I have kept America out of new wars and our troops are coming home,” Trump said last month while accepting the Republican presidential nomination at the White House.

U.S. military officials have already announced that they intend to cut troops in Afghanistan down from current levels to around 4,000 or 5,000. The president is scheduled to make an announcement in the coming days.

US Troops to stay in Syria 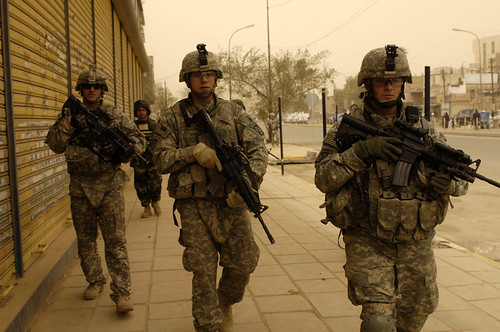 There will be no imminent adjustment to the currently about 600 U.S. troops in Syria.

McKenzie said the withdrawal decision was realized because of “our confidence in the Iraqi Security Forces’ increased ability to operate independently.”

The “ultimate goal” is for Iraqi forces to be responsible for “preventing an ISIS resurgence and of securing Iraq’s sovereignty without external assistance,” he said.

For the American military in Iraq, it’s been a long and expensive trip. US forces, under President George W. Bush, invaded Iraq in 2003.

President Obama announced the end of the Iraq War in 2011 but then returned troops to Iraq in 2014 to fight against ISIS.

This will be the first time since 2016 that US troops are withdrawing from Iraq.

“The journey has been difficult, the sacrifice has been great, but the progress has been significant,” McKenzie said.