Trump recently visited a Washington DC church that had been burnt by rioters participating in the nationwide riots and protests over the death of George Floyd. The mainstream media, which Trump regularly refers to as the real opposition party, almost universally blamed the President for deploying tear gas on protesters to clear the area around the church before the appearance. The only problem is that it never happened. No tear gas or heavy-handed police action was used to clear the church.

Gregory Monahan, The acting chief of the United States Park Police (USPP), declared that no tear gas was used around St. John’s church in preparation for President Trump’s visit this Monday.

The USPP provided help to the Secret Service in setting up temporary fencing at Lafayette Park on Monday.

For nearly a whole day, the media reported the use of tear gas in DC’s Lafayette Park with no evidence.

We now know it wasn’t true.

Every news organization which reported the tear gas lie should immediately correct or retract its erroneous reporting.https://t.co/DesRIuN135 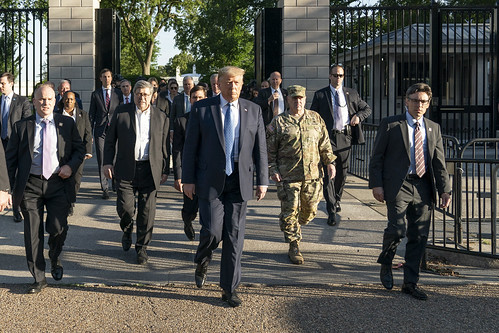 Monahan described how violent rioters assailed the police by throwing things like bricks and caustic chemicals. Officers discovered caches of baseball bats, metal poles, and other riot weapons hidden in the area. Evidence of plans to violently attack the police had also been discovered. As rioters climbed to neighboring rooftops and surrounded the area, the police issued three warnings for them to disburse. As the rioters became increasingly aggressive, Monahan said that police used smoke canisters but no tear gas to secure the area. The temporary fence was successfully installed.

Monahan also stated that, contrary to media reports, President Trump had no role in planning or ordering the dispersal of the rioters. This was supported by White House counselor Kelyanne Conway. Conway noted to reporters that “Clearly the president doesn’t know how law enforcement is handling his movements.”

51 USPP officers have been injured protecting DC’s national monuments over 4 days of violent riots. Eleven have been hospitalized.

President Trump walked out of the White House at 7 p.m. on Monday and went to nearby St. John’s Church with his entourage. Just prior, he had announced in the Rose Garden that military personnel were going to be deployed to stop the rioting in DC. Trump walked through Lafayette Park, which had been cleared of protesters an hour prior. At the church, Trump announced that “We have the greatest country in the world. We’re going to keep it safe.”

About 20 minutes later, Trump was back in the White House. Police professionally and non-aggressively cleared the area around the church and Lafayette Park without the use of tear gas. Just as with the misrepresentation of the size of the audience at Trump’s inauguration, the lies of the fake news mainstream media won’t stop until there’s someone in the White House who their parent corporations have bought and paid for.