Since its inception, the 2020 presidential election has taken several fascinating turns.

During the primary season, Joe Biden battled with other Democrat candidates, ultimately winning his party’s nomination; meanwhile, President Trump easily won the GOP nomination, even against the few never-Trump “conservatives” who attempted to challenge him. 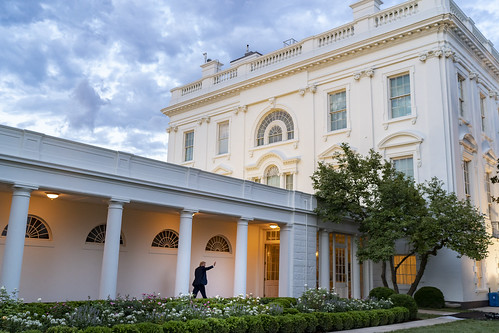 “President Trump in the Colonnade” (Public Domain) by The White House

As the general election of 2020 continues, the campaigns are heating up and getting more intense. Trump and Biden will have their first debate later this month while the former vice president will also participate in a CNN town hall.

On Saturday, the 45th president traveled to Nevada in order to rally with supporters. Breitbart News notes the ways in which this rally marked a significant turn in the 2020 presidential election.

What Happened in Nevada?

While in Nevada, the president tore into Biden for putting out an ad based on the untrue tale of him disparaging fallen and wounded war heroes and servicemembers.

Despite being published by The Atlantic, multiple sources have come out and denied claims that Trump ever mocked wounded, fallen soldiers, or tried to keep them out of parades honoring the military.

President @realDonaldTrump rips the phony 'The Atlantic' story: There’s nobody that loves our military more than me pic.twitter.com/io8tjve3l1

The 45th president spoke out against the libelous story both on Twitter and while campaigning before thousands of Nevada supporters. Trump explained that in light of Biden’s ad, he “[doesn’t] have to be nice anymore.”

The president also confirmed his love, respect, and support of the military; this is something that he’s shown not just through words, but also through his policies.

Finally, Trump ripped Biden as a “pathetic human being” who is “in his damn basement again.” The president also hinted that his 2020 election rival won’t be able to hold his own in the general election debates; shortly thereafter, Trump then asserted that Biden just wants to “go to sleep.”

New Information on the Biden Campaign

Trump’s warning that Biden is beholden to and controlled by the radical left continues to prove accurate. New reports confirm that Democrat Mike Bloomberg is set to spend $100 million in Florida to help out Biden’s campaign.

Donald Trump and I have pretty different philosophies when it comes to giving our word.

When I tell the American people I’m going to do something — I follow through. pic.twitter.com/FCHpIGHtf2

The former vice president has yet to respond to criticism against his untrue ad targeting Trump. Instead, Biden’s social media accounts are filled with glamourizations of far-left policies and deceptive assertions that President Trump doesn’t keep his word.

What did you think about President Trump’s rally in Nevada yesterday? How long do you believe Democrats will keep using The Atlantic’s fake story to hurt Trump politically? Let us know in the comments section below!