A new poll was published over the weekend that gives President Trump a lead over Joe Biden both nationally and in the key battleground states.

The poll was run by the Democracy Institute on behalf of the Sunday Express. Nationally, it gives Trump 48 percent to Biden’s 46. Trump’s lead in the key battleground states is even bigger. Based on the results of this poll, Trump would get 309 electoral votes, surpassing his 2016 result.

Latest Democracy Institute/ Sunday Express poll gives Trump an overall lead by 2 points based on the view he is best to revive the economy post coronavirus @DemocraticINST @Daily_Express @realDonaldTrump https://t.co/dj6iJXYuOQ

Here is the most relevant information, IMO, from the Democracy Institute's August poll, which was done for the 'Sunday Express.' Check out the info about the DI's individual polling of Minnesota, Florida, and New Hampshire, as well as the Electoral College prediction. pic.twitter.com/GwIDm66SVI

The poll gives Trump 53 percent of the white vote to Biden’s 46 percent. More significantly, the poll shows Trump has the support of 20 percent of African American voters, an upset from his 8 percent in 2016, and a significant dent in the Democrats’ base. Trump’s support among Hispanics has risen to 38 percent against Biden’s 51 percent, a significant inroad.

The Sunday Express summarized the poll’s results, saying, “Crucially, President Trump has a lead of 48 percent to 43 percent in the swing states Florida, Iowa, Michigan, Minnesota, Pennsylvania and Wisconsin which would put him back in the White House with an electoral college tally of 309 to Biden’s 229.”

The paper went on, “The polling suggests Mr Trump is emerging as the race leader because of a belief he is best in handling the economy. With a third of voters putting the economy as the top election issue and 66 percent thinking that the economy is bouncing back after coronavirus, voters believe that Trump is better for the economy by 57 percent to 43 percent.”

Patrick Basham, director of the Democracy Institute, has argued that the poll shows that the Biden campaign may have “reached its high water mark.”

According to Basham, “Although Biden remains in a competitive race with Donald Trump, and may well do so until election day, his support isn’t growing. And, tellingly, almost all of the issues that matter most to voters are trending in President Trump’s favour. More Americans are concerned about the economy and keeping their current, or getting a new, job. They don’t especially blame Trump for the lockdown-induced economic contraction, and they think he’ll do a better job of righting the economic ship than Biden.”

The poll found that the silent majority that supports the president is growing, a trend that bodes ill for Biden and the Democrats. In a month, the number of closeted Trump voters rose from 71 percent to 66 percent. The ‘enthusiasm gap’ is also a major factor in this election, with 79 percent of Trump voters described as enthusiastic to vote for their candidate to Biden’s 41 percent.

Biden may have to drop out over mental state 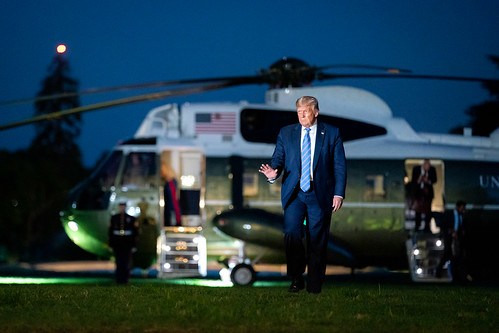 Concerning Biden’s dementia, the Sunday Express wrote, “Concerns that Mr Biden may be suffering from the early stages of dementia are also increasingly boosting Donald Trump’s chances of victory in the Presidential election, a new poll has revealed. According to this month’s poll 58 percent believe Mr Biden is suffering from cognitive decline compared to 55 percent last month. More worryingly for the former Vice President and Senator, is that 48 percent are less likely to vote for him as a result compared to 40 percent a month ago.”

The paper continues, “The polling suggests Mr Trump is emerging as the race leader because of a belief he is best in handling the economy. With a third of voters putting the economy as the top election issue and 66 percent thinking that the economy is bouncing back after coronavirus, voters believe that Trump is better for the economy by 57 percent to 43 percent.”