Governor Gavin Newsom of California has garnered his full monthly salary despite asking state workers in May to take a pay cut to ease the state’s burden in fighting the coronavirus pandemic.
While elected state officials are exempt from such pay cuts, Newsom pledged that he would voluntarily slash his salary when asked state workers to make the same sacrifice.

But a Sacramento Bee Thursday report revealed that Newsom has continued to draw his full monthly salary of $17,479.

A Newsom office spokesperson blamed the issue on an “administrative error.”

“The Governor publicly committed to taking the same pay cut as other state workers when he introduced his budget in May and has officially asked the Controller to adjust his pay, effective July 1,” he said. “The reductions for both July and August will be deduced for the next pay period.”

KOVR in Sacramento also confirmed that PlumpJack, a winery and hospitality company based in Northern California, founded and partly owned by Newsom, was open until early July – long after Newsom ordered the closure of all non-critical business in March.

The U.S. Treasury Department revealed data that also shows that the wine firm received a loan from the Paycheck Protection Program worth $150,000 to $350,000.

Newsom’s handling of the pandemic raises a lot of questions 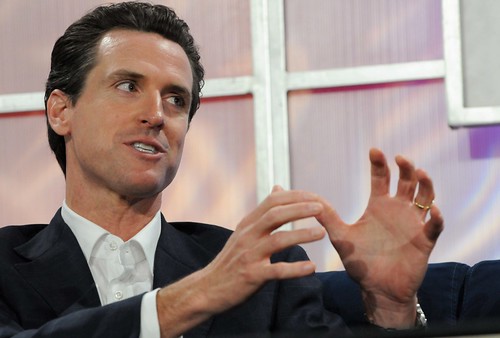 Information from the state controller’s office reveals that the state controller Betty Yee was the only one of eight elected constitutional officers in California to take a pay cut last month, The Bee reported.
The accusation against Newsom is the latest episode in this summer’s series of missteps that put his administration in a less than favorable light. Newsom’s handling of a resurgence of cases in the state earlier this month was blamed for a data error that resulted in a backlog of almost 300,000 virus test results.

“The buck stops with me, I’m accountable,” he said at a tense news conference, his first speech since the mistake was reported by state officials. “No one’s trying to hide that; no one’s trying to mask that, we’re owning that, we’re moving forward to address those issues.”

His tone was distinctly different from what it was when the national fight against the virus started in California in March, while the state initially escaped the worst effects. He proclaimed the first statewide stay-at-home order anywhere in the world in commanding news conferences held almost daily, and received broad obedience from the 40 million citizens of the state.