A New Jersey teen believed she was just exercising her First Amendment rights when she held a protest to support “Black Lives Matter.” Not long afterward, she got a bill in the mail for thousands of dollars from the mayor.

Mayor Mario Kranjac (pictured below) who sent Emily Gil a bill for $2,500
for Police "Overtime", should be celebrated and not be threatened with by her own local community for speaking out against racism and bigotry. Emily had organized a BLM rally. pic.twitter.com/e3slyUzNEH

Gil notified the police of the demonstration in advance

Emily Gil, 18, organizer of a BLM March in Englewood Cliffs, NJ stated that a “shortage of affordable housing options in her neighborhood was a racial issue” and should be brought to the public’s attention. That means, turn every complain into a racial issue & get Tax Payers pay.

Since then the mayor has said he is rescinding it.

Emily Gil, 18, was inspired to stage a rally this summer in Englewood Cliffs, New Jersey, after seeing thousands of Americans express support for the “Black Lives Matter” campaign.

It’s an issue we care about, and we notice these issues in our own town, so we can do something about it, Emily Gil said.

She also wanted to highlight a lack of affordable housing.

She informed local authorities of the demonstration in June, and also met with the chief of police to work out the logistics. On July 25, the protest was held without a hitch and lasted about 90 minutes.

A few days later, Emily Gil said she received a letter from Mayor Mario Kranjac, instructing her to pay for police overtime to the tune of $2,500.

“I was shocked when I read that I had to pay to exercise my First Amendment right” she said. She believes she’s been singled out for her position on affordable housing.

The mayor said he was the first to tackle the housing crisis in decades, and had no issue with the demonstration.

“And we made sure that we fulfilled and satisfied our obligation to make sure that they can exercise their freedom of speech and to assemble peaceably,” said Mayor Kranjac.

Kranjac said the borough has an law in place that requires it to charge for any costs incurred during “private events” for police services. He said the charge sent to Emily Gil was normal procedure. 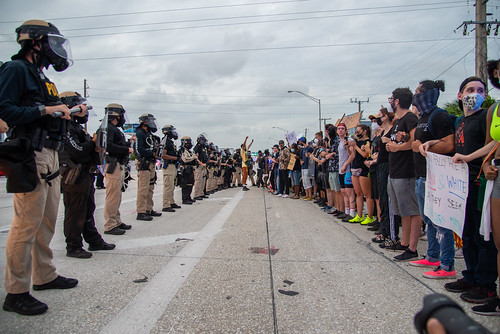 “We always bill the bicycle race or running the race or any other event, where our police are used, including utility work, people pay for the overtime,” said the mayor.

He later said, however, that he is rescinding the bill, which he said was sent on the advice he got from the borough administrator, who he believes has checked with the borough lawyer.

“I was told that all private events requiring ‘police overtime”’should be ‘paid’ for by the organizers. It was never intended as a fine, but rather as a fee, he said in a statement.”

“I have researched the issue further with my own counsel, and I am hereby rescinding the bill, subject to our Council’s ratification of my action,” said Kranjac.

“I always want to make certain that everyone’s Constitutional Rights are fully respected. We will have to adjust the Borough’s ordinances accordingly.”

He said he was pleased that Gil could express her freedom of expression and right to assembly and wished her success in her college career.