On Tuesday, New York Times writer and opinion editor Bari Weiss resigned over concern about journalistic standards at the ‘paper of record.’ Weiss made her resignation letter public, airing grievances like a “new consensus” at the NYT “that truth isn’t a process of collective discovery, but an orthodoxy already known to an enlightened few whose job is to inform everyone else.”

Bari Weiss isn’t a conservative, far from it, and they still made her life unbearable because she challenged aspects of Leftist orthodoxy.

The modern Left is ruled by its fanatics & poses the greatest threat to free expression.

The NYT newsroom and opinion section have let fear take over. They caved to the mob.

Thank you, Bari, for taking a stand for differing viewpoints, even if you don’t agree with them.

Weiss published her resignation letter, addressed to the NYT’s publisher A. G. Sulzberger, on her personal website. In the letter, Weiss describes how she was given a position at the NYT to diversify the paper’s voices. She says that the 2016 election showed that the NYT “didn’t have a firm grasp of the country it covers,” so they felt the need to hire her, a Jewish, pro-Israel, pro-choice, bisexual writer who has criticized the #MeToo movement.

Weiss goes on to argue that, “the lessons that ought to have followed the election — lessons about the importance of understanding other Americans, the necessity of resisting tribalism, and the centrality of the free exchange of ideas to a democratic society — have not been learned” at the NYT.

She argues that “Twitter is not on the masthead of The New York Times. But Twitter has become its ultimate editor. As the ethics and mores of that platform have become those of the paper, the paper itself has increasingly become a kind of performance space. Stories are chosen and told in a way to satisfy the narrowest of audiences, rather than to allow a curious public to read about the world and then draw their own conclusions. I was always taught that journalists were charged with writing the first rough draft of history. Now, history itself is one more ephemeral thing molded to fit the needs of a predetermined narrative.” 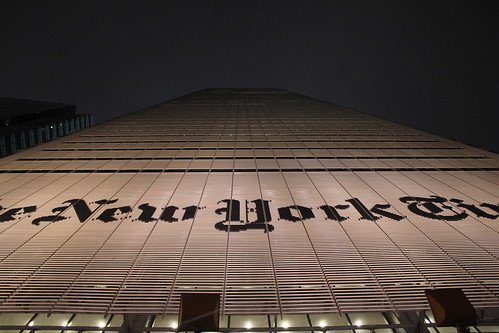 Weiss goes on, “Part of me wishes I could say that my experience was unique. But the truth is that intellectual curiosity—let alone risk-taking—is now a liability at The Times. Why edit something challenging to our readers, or write something bold only to go through the numbing process of making it ideologically kosher, when we can assure ourselves of job security (and clicks) by publishing our 4000th op-ed arguing that Donald Trump is a unique danger to the country and the world? And so self-censorship has become the norm.”

Weiss criticizes the dogmatic editorial line of the NYT, saying “The paper of record is, more and more, the record of those living in a distant galaxy, one whose concerns are profoundly removed from the lives of most people. This is a galaxy in which, to choose just a few recent examples, the Soviet space program is lauded for its “diversity”; the doxxing of teenagers in the name of justice is condoned; and the worst caste systems in human history includes the United States alongside Nazi Germany . . . Nowadays, standing up for principle at the paper does not win plaudits,” she says. “It puts a target on your back.”