Trump signed the Coronavirus relief bill into law on Friday, shortly after it was passed by the senate. Not everyone is celebrating, however. Speaker Nancy Pelosi (D-CA), who failed to get hardly any of her liberal agenda shoehorned into the bill, was not invited to the signing at the White House. The radical fringe of Pelosi’s party is similarly distraught over how little of funding in the bill will go to non-Americans.

Alexandra Ocasio-Cortez (D-NY) has taken to Twitter to bemoan the fact that you will need a social security number to qualify for the $1200 checks going out to American families. The representative argues that a tax ID (ITIN) should be enough to qualify for a check.

To clarify, $1200 checks are ONLY going to some w/social sec numbers, NOT immigrants w/ tax IDs (ITINs).

Thanks to GOP, these checks will be cut off the backs of *taxpaying immigrants,* who get nothing. Many are essential workers who pay more taxes than Amazon.

At present, ITINs are available to immigrants regardles of whether they are residing in the country legally.

Gaetz: checks should go to Americans 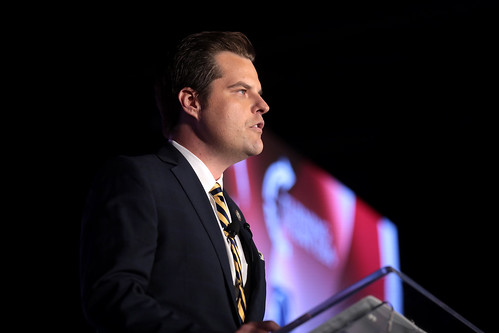 Besides the $1200 checks, out of the $2.2 trillion of taxpayer money allocated to prop up the economy, $350 million is earmarked as migrant and refugee aid. That’s a leap from the $50 million allocated for refugees and migrants in the original bill proposed by Republicans.

Representative Matt Gaetz (R-Florida), has argued that Americans should be put first; the $350 million for refugees should go to citizens and taxpayers. Millions of Americans are losing their jobs and thereby their health insurance in the midst of this pandemic-driven downturn, the greatest since the 1930s.

Democrats: This is not the time to advance your legislative agenda.

This is the time to put #AmericaFirst. pic.twitter.com/1N9ArCVr5V

Dems try to steal the credit

Besides pushing for this massive boost in migrant funding, democrats, led by Pelosi, have tried to take credit for reinvigorating the bill, which, as signed into law, is otherwise almost identical to the original bill put forward by the Republicans. House Minority Leader Kevin McCarthy (R-CA) has called this out as a bald-faced lie.

Pelosi claimed that Dems ‘turned the bill upside down.’ However, among her wish list for the bill, which included mandated diversity on corporate boards, planned parenthood funding, and expanded tax credits for solar power, Pelosi managed to shoehorn little more than extra funding for the Kennedy Center for the Performing Arts in DC. Meanwhile, AOC was busy misrepresenting the bill as failing to support hospitals or unemployment benefits. The bill provides $100 billion for hospitals.

The Brooklyn socialist blamed Republicans for the bill’s fictive failings, despite it having passed 96-0 in the senate.

The Tax Policy Center has determined that around 90 percent of American households will benefit from the cash assistance stipulated in the bill, the largest aid package in US history.