Republicans are sweeping congressional special elections in Wisconsin and California. Both candidates, Tom Tiffany in Wisconsin and Mike Garcia in California, were heavily backed by President Trump despite his inability to campaign on their behalf in person due to the coronavirus pandemic.

Tiffany’s win illustrates a broader trend in rising support for President Trump and the Republicans in Wisconsin. It also gives Republicans 5 out of seven of Wisconsin’s seats in Congress.

Big News: Tom Tiffany of the Great State of Wisconsin has just become Congressman Tom Tiffany. He will do a FANTASTIC job for the people of Wisconsin, and the United States. Congratulations!

First Republican Congressman in California since 1998

The California election contest between Republican Mike Garcia and Democrat Christy Smith is a lot closer. Although the final numbers are yet to come in, discounting a sudden upset, Garcia is set to win. This will give Republicans their first seat in California since 1998.

Obama and Hillary Clinton came out heavily supporting Smith, but it appears that it wasn’t enough to overcome Trump’s support for Garcia, a former navy combat pilot who is strong on guns and immigration.

There are fears that the Democrats will stuff the ballot boxes with absentee ballots. California permits ‘ballot harvesting,’ which allows party representatives to pick up absentee ballots and drop them off at polling stations. Smith has said she will not concede the election until all the ballots are in, sparking fears that Democrats are practicing a dry run in how to manipulate elections with mail-in and absentee ballots in the run up to November. Garcia currently has a two-digit lead.

Trump and other Republicans have also voiced concerns that Democrats were trying to steal the election by setting up a last-minute polling station.

The special election in California became necessary after Democrat Katie Hill resigned after she resigned following an improper sexual relationship with a member of her staff, an episode reminiscent of Tara Reade’s 1993 allegations of sexual assault against her employer, then-senator Joe Biden. To Biden’s credit, Trump famously talked about committing such acts in a decades-old recording, Biden actually took action.

Meanwhile, President Trump has doubled his 2016 Presidential primary numbers in Nebraska. Voters are responding positively to the Trump Administration’s handling of the coronavirus pandemic while scandals involving 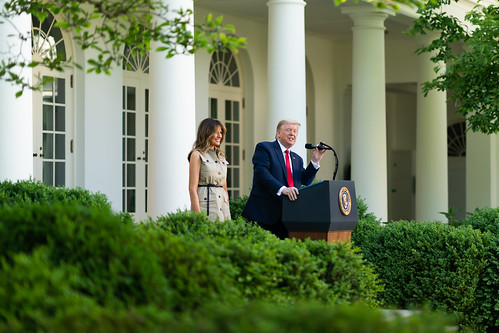 “National Day of Prayer” (Public Domain) by The White House