Bob Avakian, the founder and leader of the Revolutionary Communist Party USA and the only white man to have ever been a member of the Black Panthers, has announced his support for Joe Biden in the November presidential election.

Commie Leader: you must vote Biden and only Biden

Avakian emphasized that his supporters should not vote for a third-party candidate, they must vote for Biden.

Avakian stressed, “To be clear, this means not a ‘protest vote’ for some candidate who has no chance of winning, but actually voting for the Democratic Party candidate, Biden, in order to effectively vote against Trump.”

Avakian made these statements despite his belief that Biden and the Democrat Party are “representatives and instruments of this exploitative, oppressive, and literally murderous system of capitalism-imperialism.” It is unclear why Trump is any worse. Traditionally, communists did not believe in liberal democratic elections at all. One was actually held after the Bolshevik Revolution in Russia. A different socialist party won, but the Bolsheviks clung to power anyway.

“But this election is different,” pontificated the confused communist leader.

Commie leader Avakian lost in his own sophistry 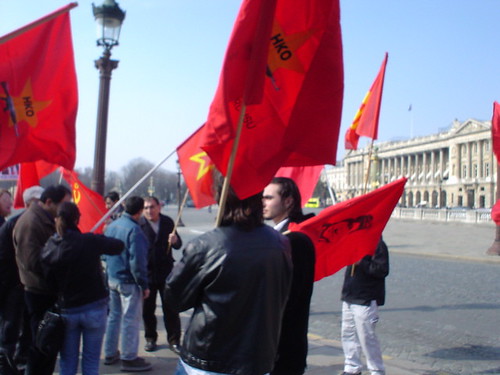 “Revolutionary Communists for Peace” (CC BY 2.0) by celesteh

Avakian reasoned, “The question is not whether Biden and the Democrats represent something ‘good.’ Biden is not ‘better’ than Trump, in any meaningful way — except that he is not Trump and is not part of the move to consolidate and enforce fascist rule, with everything that means.”

Avakian continued, “To approach this election from the standpoint of which candidate is ‘better’ means failing to understand the truly profound stakes and potential consequences of what is involved. The fact is that there can be one — and only one — ‘good’ that can come out of this election: delivering a decisive defeat to Trump and the whole fascist regime.”

Bob Avakian has a track record of endorsing violent fringe movements, such as the Naxalite rebels in India or the Shining Path in Peru, both Maoist guerrilla movements that tried to overthrow their respective governments.