Republicans are taking a stand against Democratic lawmakers who think they can deny citizens their right to law and order and then get a bailout to cover the damages.

First, President Trump rejected Minnesota Governor Tim Walz’s request for $500 million to cover damages caused by the riots over George Floyd’s death. Now, Texas Senator Ted Cruz has announced that he is introducing a law to make local governments liable to property tax payers if they deliberately fail to provide law and order.

Minnesota Dems willfully allowed Minneapolis to burn & then blamed the police whom they demonized. Now, they want the fed govt to pay the bill.

No handouts for local governments that fail their citizens

Dems support the riots. The vandals. The anarchists.

That’s their base. And they’re terrified to offend them. https://t.co/B5nRPRGBYM

Cruz tweeted, “Minnesota Dems willfully allowed Minneapolis to burn & then blamed the police whom they demonized. Now, they want the fed govt to pay the bill. I’m introducing legislation to make local govt liable to private property owners if officials deliberately withhold police protection.”
1,500 buildings in Minnesota have been damaged in the rioting.

Governor Walz released a statement that reads, “The Governor is disappointed that the federal government declined his request for financial support. As we navigate one of the most difficult periods in our state’s history, we look for support from our federal government to help us through.”
The Twin Cities Pioneer Press has written about Minneopolis Mayor Jacob Frey’s performance in the face of the riots.

“A close examination of the events, including interviews with more than two dozen elected officials, activists, business owners and residents, suggests at least some of the destruction resulted from a breakdown in governance. The mayor and other local leaders, many of them relatively new to their roles, failed to anticipate the intensity of the unrest or put together an effective plan to counter it.

Frey has struggled to regain the confidence of Minneapolis residents. He has been slammed by business owners for not doing enough to protect their property. He has been pilloried by the police for ordering the abandonment of the precinct house.”

The Minneapolis Police 3rd Precinct was evacuated in late-May on Frey’s orders. The city council has also voted to dismantle the Minneapolis police force entirely.

Democratic lawmakers lost in their own sophistry 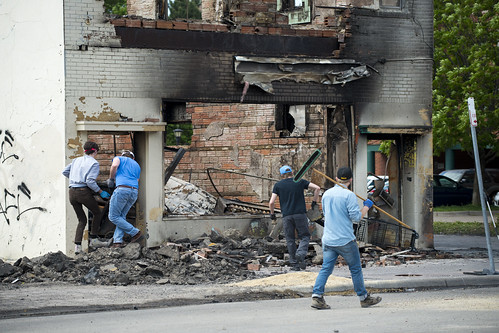 “Cleaning on Lake Street” (CC BY 2.0) by Fibonacci Blue

On CNN, Minneapolis City Council President Lisa Bender was asked by Alisyn Camerota, “Do you understand that the word ‘dismantle’ or ‘police-free’ make some people nervous? For instance, what if in the middle of the night, my home is broken into? Who do I call?”

Bender responded, “Yes, I mean, I hear that loud and clear from a lot of my neighbors, and I know, and myself too, and I know that that comes from a place of privilege because for those of us for whom the system is working, I think we need to step back and imagine what it would feel like to already live in that reality where calling the police may mean more harm is done.”