The great state of Tennessee has taken a huge step toward becoming a Second Amendment sanctuary state. On Monday, Tennessee’s House of Representatives passed a resolution reinforcing constitutional and legal protections of gun ownership.

The resolution was drafted in March. It compels the state to extend “a safe harbor to Virginians and other United States citizens whose constitutional rights are being violated by elected officials.” It specifically guarantees that private citizens have the right to own arms analogous “to those of their government’s basic infantry unit.”

Tennessee upholds the spirit of the US Constitution 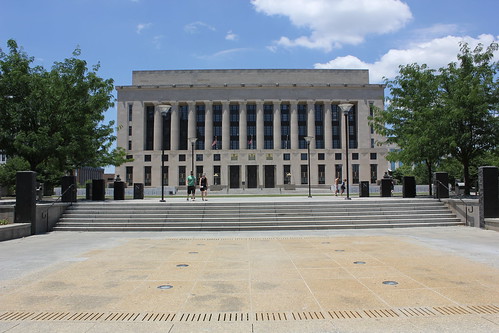 “Nashville Courthouse and City Hall” (CC BY 2.0) by TexasExplorer98

The resolution goes on to outline the individual’s constitutional right to own “semi-automatic AR-15s, AK-47s, and similar firearms.” It explicitly underscores that citizens have the right to such arms to enact their God-given right to oppose state tyranny. The resolution makes reference to research on how governments in the past have become tyrannical, killing upwards of 260 million of their own citizens in recent history. The US Constitution was of course specifically designed to prevent this.

The resolution was spurred on by violent riots that set the Nashville Metro Courthouse on fire over the weekend. Members of the Tennessee state house of representatives voted 64-24 to send the resolution to the state’s senate.

The riots in Nashville and elsewhere in the state are part of the violent nationwide reaction to the police killing of George Floyd.

Multiple fires are now going on inside the Metro Nashville courthouse as rioters continue to smash windows and spray paint the building pic.twitter.com/kAQptLrHnE

On Monday, The Metro Nashville Police Department tweeted an announcement declaring that the main suspected perpetrator of the act of arson was under arrest.

Unsurprisingly, Tennessee Democratic Representative G.A. Hardaway opposed the resolution but hypocritically claimed that he will encourage his black constituents to arm themselves. He also claimed that despite his wishy washy position on a fundamental right upheld in the US Constitution, that sometimes you have to “use force to ensure your individual liberties and to preserve the freedoms that you want.” Others believe that freedoms are more than something to casually ‘want,’ but a precondition for a life of dignity.

Riots continue to engulf the country as National Guardsmen and the US military have been deployed to protect the life and property of law-abiding citizens. Professional rioters in the form of organized anarchist groups like Antifa have taken advantage of the situation for their own ends with little connection to the death of George Floyd.