With less than 50 days left until the 2020 presidential election, the Trump campaign is forging full steam ahead.

This means getting out and about, connecting with voters, etc. Communicating the need for a second term of Trump in office is a critical element of the president’s re-election, as is warning about the danger of electing Joe Biden into the White House. 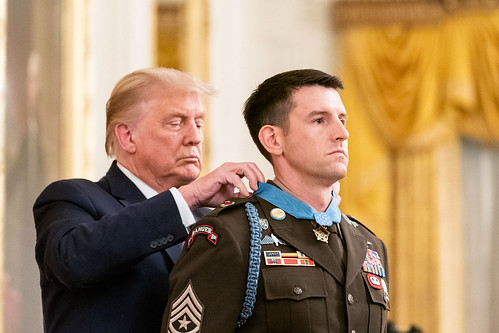 On Monday, President Trump himself participated in a roundtable event based in Pheonix, Arizona, as documented by Fox News.

A Closer Look at the Arizona Roundtable Event

The president explained that while Biden and his handlers seek “an American nightmare,” this will not be allowed to happen under the Trump administration.

Martha Llamas shares the story of her American Dream and how she rose from being a janitor to sitting next to the President of the Unites States as a business owner#LatinosForTrump pic.twitter.com/qWj63j8AVN

The president acknowledged the reality that many Hispanic and Latino individuals come to the United States in pursuit of the American Dream.

While explaining that the American Dream would die with Biden as president (and his socialist handlers in power), Trump talked about how his administration has led to economic gains benefiting Americans of all races and backgrounds.

More on the Arizona Roundtable

President Trump was not the only one to speak during yesterday’s roundtable.

Various attendees shared their stories and discussed how the American Dream has benefited them in their personal lives. Some attendees also noted that they were glad to be able to sit with the president and hear what he had to say.

The 45th president’s Arizona roundtable also happened on the same day Kamala Harris engaged in a virtual roundtable with Arizona business owners. During this time, Harris let it slip that if Biden wins the presidency, the nation will be under “a Harris administration with Joe Biden.”

Harris later attempted to clean this up by noting that Biden would still be “president of the United States,” but many Americans recognize the Freudian slip for what it was. Seeing as Harris’ Senate voting record is the most liberal of all, this ties back into Trump’s warning that a “President Biden” would mean the end of the American Dream.

What did you think about President Trump’s Arizona roundtable on Monday? Don’t hesitate to let us know in the comments section below!