Senator Bernie Sanders has announced the suspension of his campaign for nomination as Democratic candidate for the 2020 presidential election, but a couple of things don’t add up.

Instead of endorsing the presumptive candidate, Joe Biden, Sanders will retain his delegates and remain on the ballot at the DNC. As President Trump noted about Sanders’ announcement, “That’s not dropping out, when you keep your delegates and then you want more delegates before you get to the convention, that’s a weird deal going on there.”

More curious is former-President Obama’s continuing abstention from endorsing his VP. President Trump offered a cryptic comment on that too, saying, “It does amaze me that President Obama hasn’t supported—Sleepy Joe. It just hasn’t happened! When’s it going to happen? Why isn’t he? He knows something that you don’t know.”

President Trump on Obama not endorsing Joe Biden: “He knows something that you don’t know.. that I think I know.”

Could the current and former president both have information on Joe Biden’s soundness of mind? The 77-year-old Democratic candidate has displayed worrying signs on the campaign trail that he is well into his dotage. At 73, President Trump is no spring chicken. Nevertheless, leading podcaster Joe Rogan recently observed how little of a toll being the most powerful man on earth appears to have taken on the President in comparison to George W. Bush or Barack Obama. Unlike Trump, both former presidents visibly aged rapidly after taking office.

Trump cleans the floor with rivals in the Polls 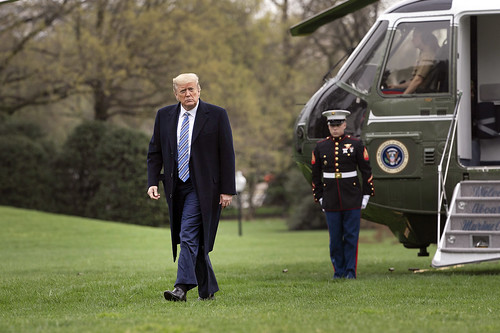 Whatever the dirt is on Sleepy Joe, the polls are in. The people gave Trump an 8-point lead over Biden when asked who they had more confidence in to lead the country during the coronavirus pandemic. 44% of respondents voiced confidence in the president and only 36% did the same for Biden.

In a different poll run by Star Political, 74% of respondents said they trusted President Trump over Congress or the media regarding the fight against the coronavirus pandemic. Trust in Congress was shockingly low, at 16.1%. Perhaps less shockingly, trust in the often overtly biased news media was even lower, at 9.8%.

Media insiders know that a reporter for the MSM can write lies about everything, from Russiagate to hydroxychloroquine, but will always fail up, keep their job and even be promoted, as long as they stick to the editorial line.

A third poll, this one by CNBC, asked Americans to respond to Trump’s performance on the economy during the coronavirus pandemic. A record 52% of respondents expressed approval with the President’s performance. The same poll also set a record for Trump’s overall performance, at 46%.