Trump has a Surprise for Child Attacked by Biden Supporters

President Trump sent a gift package to the 7-year-old boy who was seen in a viral video with his mother being confronted by two women outside of the Democratic National Convention in Wilmington, Delaware, last month.

Students for Trump, a group led by Charlie Kirk, the CEO for Turning Point USA, tweeted a photo on Tuesday of assorted items, including a signed “Make America Great Again” hat, a mug, a water bottle, and a number of other presidential paraphernalia it said was delivered to the boy, Riley, and his mother, Abbey.

The White House confirmed to the Washington Examiner that it sent the gifts to Riley and that the items were from the president’s personal collection.

Right before these two @JoeBiden supporters ASSAULTED 7-year-old Riley outside of the DNC National Convention, they threw coffee at me when I questioned them about President Trump.

Charges will be filed! pic.twitter.com/jQuo4NAEzx

✳️Donald Trump Jr. responded to the attack on Twitter saying that Riley would receive a new Trump hat and he received a phone call from the White House as well.pic.twitter.com/pT0Oeclnqg

The video shared by Students for Trump showed two women walking past Riley and his mother, ripping up their signs in support of Trump and taking a “Make America Great Again” hat from her son.

Riley is seen in the video protesting the girls’ actions. “That’s somebody else’s hat!” he said, appearing to cry. “I just wanted to sit on the floor.”

In a tweet, Abbey said she was waiting for a table at a restaurant with her son after attending a demonstration against Democratic presidential candidate Joe Biden as the women approached.

Abbey also said she was punched in the face and hit several times with the women’s purses. In the end, her son’s hat was thrown over a fence.

Among those who reacted to the video with disgust was Trump’s eldest son, Donald Trump Jr. He called the incident “sick” and encouraged his followers to help identify the women. 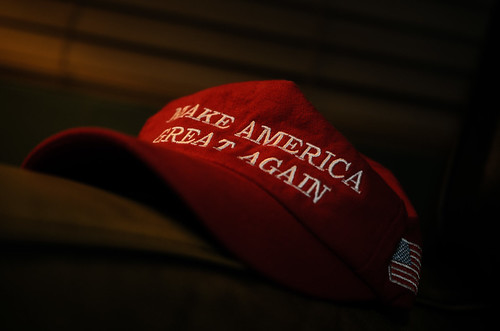 Donald Jr. got involved to identify the assailants

Joe Biden supporters stole Riley’s hat, ripped up his sign & made him cry.
Watch. It’s on video. This is sick.

Wilmington police were called to the site of the altercation and later arrested the women, who were identified as Olivia Winslow, 21, and Camryn Amy, 21.