Trump is Building Support in a Black Silent Majority

Despite the dogmatic, corporate-media-fuelled prejudice of the SJW crowd, President Trump has done a lot for the African American community. Polls show that these efforts have raised Trump’s support in that community substantially.

RT to share her powerful message from inside of CHAZ about why she supports @realDonaldTrump! pic.twitter.com/wHqu1WuDb4

BLM protests are fiercest in the whitest cities

Ja'Ron Smith kept it 💯 on CNN (Fake News) about Prisom Reform & urban revitalization@realDonaldTrump has done so much for the black community. I can attest to that.

Glad someone said it in front of such a brain washed liberal audience.

Oddly, the George Floyd and Black Lives Matter protests sweeping the country are concentrated in the whitest cities in the nation, like Seattle and Portland. Polling has shown that visible minorities mostly do not favor defunding the police, as BLM has called for. According to Rasmussen, 67 percent of African Americans value the law and order provided by the police.

Trump has already delivered the criminal justice reform that African Americans have demanded since 1994, when Joe Biden delivered the hated crime bill. Trump has also increased the funding for historically black colleges and set a record for black employment before COVID-19 hit.

Some have argued that it’s racist for the Democrats to assume that black people are anti-police. In one weekend at the end of June, 63 people were shot in Chicago. Two children, a one-year-old and a ten-year-old were among the dead. Shootings in New York have jumped over 3 times the number at the same time last year.

Many people, including black people like a child shot in Atlanta or ex-police Chief David Dorn have been murdered by the BLM protesters. How these people are less worthy of mourning than the convicted criminal George Floyd is unclear to many Americans of every color.

The 2016 presidential election showed that we can’t trust the polls. If the media browbeats people 24/7 over what is a socially acceptable view and what isn’t, they aren’t going to openly express the unacceptable opinion, even to pollsters.

Trump has always been focused on building support among African Americans 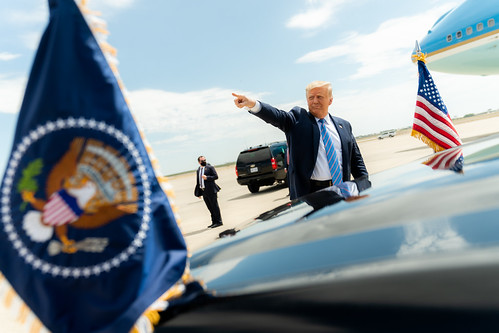 Various insiders have commented on how Trump is outplaying Biden in using social media to reach out to visible minorities, especially African Americans. For example, check out his ‘Healing, Not Hatred’ or this video he posted on Twitter.

There is one fact that the Democrats and zealous ideologues of all stripes fail to grasp. Most Americans, like most other people on this planet, care more about being safe, having food on the table, and securing a decent future for their children than any lofty ideals or noble causes.

Obama was barely an African American. His absentee father was a Kenyan immigrant and Barack was raised by white people. He cannot claim to have risen up from a legacy of American slavery. He did not deliver the hope and change he promised. Trump has done more in less time and will likely see the benefit at the ballot boxes.