President Trump has held an interview with his son in which he made some dire predictions about what would happen to the country if he does not get re-elected in November. Considering how rioting and looting has ravaged Democrat-led cities in recent weeks, Trump said that if the Democrats retake executive power, the economy will tank, police forces nation-wide would be hollowed out, and the “whole country will be Minneapolis.”

Minneapolis city council has voted to abolish the police deportment. The city now faces the fate that befell Detroit after the 1967 riots, a flight of businesses, manufacturers, and tax payers out of the city.
Minnesotans, and mid-westerners in general are known to be nice people. That may not be enough to keep businesses in the city. Truckers have declared that they will refuse to deliver to cities with defunded police departments.

Time for #Triggered with @DonaldJTrumpJr and his guest President @realDonaldTrump!! https://t.co/EMI08ROLmC 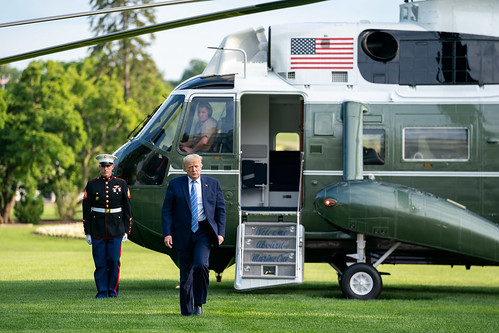 Trump also said, “I feel that if the Democrats get in, we are literally going to end up in a recession-slash-depression the likes of which you’ve never seen. There will be tremendous negative growth, tremendous bedlam all over the place, there won’t be law and order. You’ll have a Seattle, you’ll have a Minneapolis like you’ve never seen before. The whole country will be Minneapolis.”

Trump went on to ridicule Democratic-run cities, specifically criticizing the establishment of an ‘autonomous,’ police-free zone in Seattle. Trump also took credit for re-establishing law and order in Minneapolis.

The country may never recover from Democrat rule

Any protesters, anarchists, agitators, looters or lowlifes who are going to Oklahoma please understand, you will not be treated like you have been in New York, Seattle, or Minneapolis. It will be a much different scene!

Trump said, “The Democrat-run cities are the ones having the trouble. You look at Seattle, when you go to Minnesota and you take a look at what’s taken place there, it’s incredible. They tried to take over a great city, Minneapolis, and they had taken it over before I said, ‘you have to send in the National Guard.'”

During the interview on Donald Trump Junior’s online show Triggered, Trump’s son asked the president how he could convince voters in Democratic-led states to vote for him. Trump senior answered,
“I happen to think it’s explaining to people that are getting ready to vote on November 3 that there’s only one answer and you can’t go back to the bedlam,” Trump said. “The country I don’t believe would ever recover from it. You’d have a situation like Seattle times one thousand. The country would never survive it.”