“Ships from the Theodore Roosevelt Carrie” (CC BY 2.0) by Official U.S. Navy Imagery

On Monday, The United States announced that it is taking a firmer stance on China’s illegal claim to nearly the entire South China Sea. The sea is suspected to sit atop vast hydrocarbon resources and is one of the main thoroughfares for global trade.

This is the latest move by the Trump Administration to turn up the heat on Beijing. China’s communist regime has complained that the move increases tensions in the region, although the solution would clearly be for China to adhere to international law on the matter.

US pushes China to adhere to international law

China’s claims are based on the ‘nine dash line,’ a sketch made by a pre-Communist Chinese official laying claim to practically the entire South China Sea with no legal or rational justification. China has stuck to the policy without ever offering defensible support for it. It has backed up its claims with little more than bullying and a ‘might makes right’ attitude toward is neighbours around the sea.

US Secretary of State Mike Pompeo described the situation on Monday, “We are making clear: Beijing’s claims to offshore resources across most of the South China Sea are completely unlawful, as is its campaign of bullying to control them.”

Pompeo continued, “The world will not allow Beijing to treat the South China Sea as its maritime empire.”
The Chinese embassy in Washington DC responded that Washington’s accusation is “completely unjustified . . . Under the pretext of preserving stability, (the US) is flexing muscles, stirring up tension and inciting confrontation in the region.”

Other states around the South China Sea, especially Vietnam and the Philippines, have been defying China’s outlandish claims for decades. While the US has traditionally avoided taking a firm stance on the issue, it remains to be seen what practical steps it and other global players will uphold international law in the region. 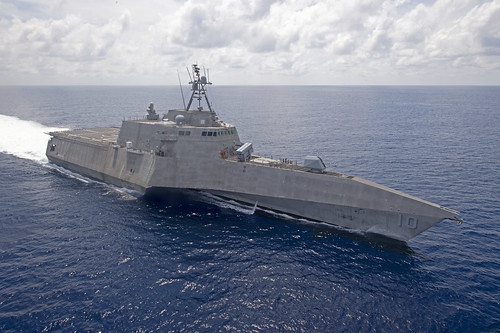 The Trump Administration has shifted focus from the Obama-era fixation on Russia, with its declining population and economy the size of New York State, to China, with nearly a quarter of the world’s population and the 2nd largest economy. Trade, the coronavirus pandemic, crackdowns in Hongkong, and the treatment of Chinese minorities have also caused tension between China and the US recently.

Chris Johnson, an analyst with the Center for Strategic and International Studies, says, “This is basically the first time we have called it illegitimate . . . It’s fine to put out a statement, but what you going to do about it?”