Last week, President Trump announced that he would sign such executive orders if Congress failed to provide such support for Americans by the end of the week.

By Friday, negotiations with the Democrat-controlled Congress broke down, so Trump came through on his promise and signed the executive orders the following day at his private country club in Bedminster, New Jersey.

Our great President Trump signs executive orders after coronavirus relief talks falter with Dems and once again taking care of the American people in need. No bailout for Sanctuary cities by democrat-led cities and states President Trump said. https://t.co/d7qPPeFeXp

Great decision by President @realDonaldTrump to use executive orders to continue the federal unemployment supplement at the $400 level. https://t.co/Xlh768cB0B

Americans will be able to continue getting unemployment claims of $400 per week. There will be a payroll tax holiday until the end of the year, protection against eviction will be maintained as will a freeze on student loan payments.

Everyone who earns less than $100,000 per year will have their payroll taxes delayed. Trump announces that part of his platform for a second term is to make that change permanent. Although Trump cut the supplemental federal unemployment benefit from $600 to $400, the extension will mean a lot to millions of Americans. 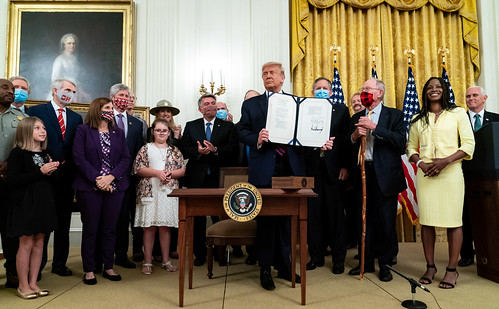 Last month, the first federal unemployment weekly claim covered by the CARES Act expired. That was followed by a week of stimulus negotiations that failed to form an agreement. As millions of Americans are still reliant on the measures, Trump moved quickly to sign the executive orders to help keep their heads above water.

Unspent funds from the previous COVID-19 relief act signed in March will be used to fund the new unemployment benefit. The state will cover 25 percent.

President Trump also released a set of campaign promises for the November election. The six promises are to defeat COVID-19, restore the nation’s prosperity, Make America the global leader in pharmaceuticals, bring jobs back from overseas, revitalize the rust belt with new factory jobs, and, of course, put American workers first.

Meanwhile, leading Democrats like John Podesta are discussing whether or not coastal states should secede from the union or start a civil war if President Trump wins re-election.