Trump to Send in the Feds to Protect the Election

“President Trump in PA” (Public Domain) by The White House

President Trump said on Thursday that he wants to send law enforcement and U.S. lawyers to November’s polls to avoid voter fraud.

As Sean Hannity was hosting Fox News late Thursday night, if the president will “have an ability” to track and stop fraud during the forthcoming November elections, Trump said, “We’re going to have everything.”

The president attacked the mail-in voting process again, criticizing compulsory mail-in ballots, using the Nevada program as an example, were “anybody can sign.”

“Nobody’s ever heard of anything like this,” he said.

“They may send them to all Democrat areas, not to the Republican areas as an example,” he added. “Could be the other way too, but I doubt it.”

Trump was asked if he had the ability to monitor and verify votes on election day:

Trump’s promise to send law enforcement to the polls comes after he and his supporters have consistently stated that mail-in voting would open the election to fraud.

The president has challenged whether the results of the election would be correct with mail-in voting enforced due to the coronavirus pandemic.

Furthermore, on Wednesday, White House press secretary Kayleigh McEnany wouldn’t reveal whether the president will recognize the outcome of the election until he is declared the winner. Trump also told “Fox News Sunday” last month he would wait to see the findings before deciding whether to accept them.

Trump told supporters this week, “the only way we’re going to lose this election is if the election is rigged.” 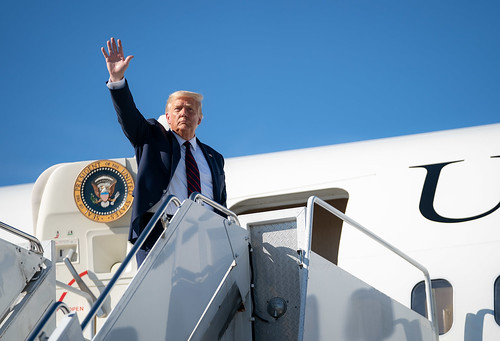 “President Trump in PA” (Public Domain) by The White House

Democrats ambivalent about the risks

Democrats continue to dismiss concerns over the integrity of mail-in voting even though examples of mail-in voter fraud keep coming in. Meanwhile, Americans freely shop at Walmart and similar enclosed locations every week. Critics of compulsory mail-in voting wonder why that is unproblematic, but one trip to the voting station is too dangerous.

Meanwhile, the evidence is mounting that hydroxychloroquine, especially paired with zinc, is safe and highly effective at treating COVID-19. The MSM has been attacking the drug for months, while social media corporations have been deleting posts describing its effectiveness, raising serious questions about their integrity and motives.