Approval for President Trump’s response to the coronavirus pandemic keeps pouring in from every corner except the Dems and the MSM. Among the only opinion holders that truly matter, the American public, Trump’s approval ratings are setting records. The New York Times has recently expressed astonishment at this, baffled that the nation dares to believe its lying eyes rather than what the NYT tells them to believe.

Andrea Mitchell at MSNBC is also more dumbstruck than usual at Trump’s approval among Democrats and independents reaching 60 percent.

Sure, Americans tend to rally around their president in times of crisis. But perhaps the liberal MSM has cried wolf one too many times. After an unremitting litany of unfounded accusations that have fallen apart under scrutiny, from Russiagate to impeachment to the bloviations over hydroxychloroquine, people are tired of getting served nothing burgers.

Which, with the evidence in, is the opposite of what President Trump is serving in his COVID-19 response. As Fox News reports, Sunday saw New York’s first drop in deaths from the disease. The number of COVID-19 patients being discharged from the city’s hospitals is also ‘way up,’ according to Governor Cuomo.

Meanwhile, the military is currently being deployed to New York City to aid the Federal Emergency Management Agency in its response to the virus.

Biden must be sent to a care home, not the White House

Joe Biden displayed increasingly worrying signs of dementia in an interview with ABC on Sunday morning. Biden repeated the blatantly false claim that President Trump had yet to appoint a military commander to deal with the pandemic. Rear Admiral John Polowczyk has been filling that post for a while.

Trump has already done that.

On March 18, POTUS invoked the DPA.

Rear Adm. Polowczyk has been in charge of supplies.

The interview proved to be one episode in the campaign-long senior moment that Biden is suffering from when clearly his loved ones should be insisting that he receive medical care.

It’s not called the “cona.”pic.twitter.com/SATING8Yya 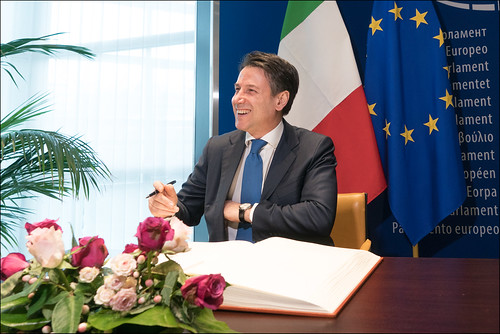 “Giuseppe Conte @ the EP” (CC BY 2.0) by European Parliament

President Trump has not only achieved objective results and approval from the American people in the fight against COVID-19 but also the gratitude of foreign leaders like Italy’s Prime Minister Giuseppe Conte. During an interview on NBC’s Meet the Press, Conte gushed praise and gratitude for the President and his aid to Italy, which has been struck hard by the pandemic.

The European Union, the ultimate liberal project and symbol of globalism, completely failed Italy in its time of crisis. As the pandemic spread, the technocrats in Brussels did little more than scold nation-states like Italy over closing their borders.

In his Sunday interview with ABC, Joe Biden offered his own two cents on travel restrictions: