A special task force set up by President Donald Trump to take down America’s most violent street gang has succeeded in putting its key leaders out of action. The operation took less than a year, resulting in terrorism charges for some of the leaders of the gang, MS-13.

Also known as Mara Salvatrucha, the gang operates across America. Most of its members are illegal immigrants from Central America. It has its fingers in many pies, including drugs, rape, murder, kidnapping, and burglary.

Thank you, @realDonaldTrump, for protecting Americans. Security moms agree that there is no place for violent gangs like MS-13 in the United States. https://t.co/ZeCuGH1aSU

Don't forget: the Obama-Biden Administration allowed MS-13 to flow over the border unchecked for eight years.@RealDonaldTrump is cleaning up Joe Biden's mess! pic.twitter.com/PGaTQY4sIk

President Trump promised to wipe out the brutal MS-13. Not long after taking office, Trump signed an executive order forcing the nation’s top law enforcement agencies to do so. The order reads, “These organizations derive revenue through widespread illegal conduct, including acts of violence and abuse that exhibit a wanton disregard for human life. They, for example, have been known to commit brutal murders, rapes, and other barbaric acts. These groups are drivers of crime, corruption, violence, and misery.”

In under a year, task force neutralizes MS-13 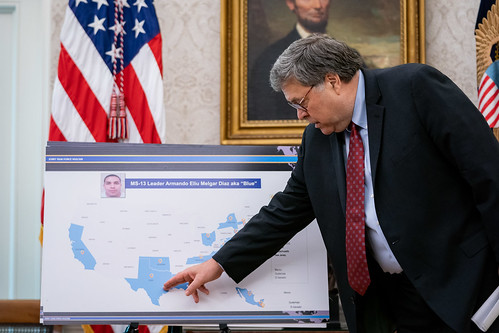 This week, under a year since JTFV was formed, the DOJ announced that it has launched several cases against MS-13 and charged one of its leaders with terrorism. The gang’s leaders, centered in Hollywood, have been neutralized with one of them facing the death penalty. JTFV is led by John Durham, the same special investigator who is building cases against the misuse of power that spawned the treasonous Russiagate debacle.

One MS-13 leader in Virginia, Melgar Diaz has been charged with at least half a dozen terrorism and narco-terrorism related charges. Meanwhile, many other members of the gang have been indicted for murder, attempted murder, kidnapping, narcotics and other felonies. For example, New York MS-13 leader Alexi Saenz is accused of committing seven murders with a machete and baseball bat, some of female high school students.

Durham has said that “MS-13 is a violent transnational criminal organization, whose criminal activities respect no boundaries. The only way to defeat MS-13 is by targeting the organization as a whole, focusing on the leadership structure, and deploying a whole-of-government approach against a common enemy.”