Why a Legendary Civil Rights Lawyer just Defected to Trump

Leo Terrell, the legendary civil rights attorney, has given up on the Democratic Party and announced that he is voting Republican for the first time.

Terrell emphasizes that he didn’t leave the Dems, they left him when they committed themselves to a radical SJW dogma.

Terrell has litigated against police brutality and violations of civil rights. Perhaps surprisingly, he sees the Black Lives Matter movement as opportunistic, hypocritical, and self-serving.

Leo Terrell explained his move in an op-ed in Newsweek

Democratic Party & #JoeBiden are insulting the intelligence of the America public. He had 8 years to do make changes & reform! But under #Trump, lowest unemployment for POC & police reform bill.

In the op-ed he writes, “I’ve spent over 20 years as a civil rights attorney in California and I’m known for not taking a back seat to anyone on police misconduct cases. Remember Dwayne Nelson? The L.A. County Sheriff’s Department hog-tied and suffocated him in a car. We won that case and put the rightful offenders in jail. Or Margaret Mitchell—the homeless woman who was shot and killed by the LAPD? We won that case too, and ultimately changed the national standard on how law enforcement handles mentally ill victims.”

“And yet, my commitment to justice and my substantial track record of putting racially driven criminals behind bars hasn’t lent itself to returning calls that I’ve made, in reaching out to longtime colleagues and friends who were behind me every step of the way when I was on “their side.” Furthermore, why am I only getting booked on “conservative” media outlets?”

“I’ll tell you why: It’s because I’m calling out the farce that is Black Lives Matter—and doing so loudly and proudly. Why? Because, this organization does not speak for me, as an African-American, and if you truly believe that Black lives DO matter, you should reconsider taking your cues from this group’s self-serving agenda.”

Terrell has done the media rounds to explain his defection and new-found support for President Trump.

The Democrats’ own dogma will be the end of them 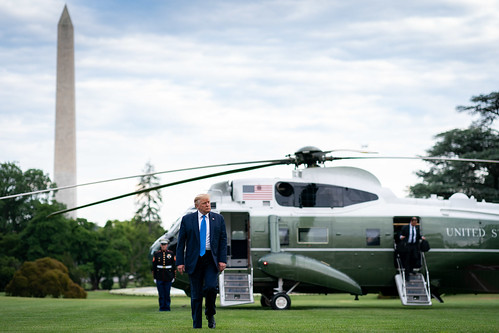 The Democrats have been walking a fine line. At heart, they represent a patronage hierarchy of plutocratic donors and their minions who try to act as puppet masters of the radical left by funding and training groups that they can control. They divert the energies of leftist moral superiority from the core classical Marxist goal of killing the rich and enjoying a grim Saturnalia with their confiscated property to correcting the ‘systemic oppression’ of every identitarian group they can think of.

In this, they focus on symbolic victories, toppling statues, posing in Ghanaian kente cloths, re-naming sports teams, and so on. Symbolic protests and riots in the name of the dogma are sacred, above the need for social distancing, no matter the damage caused. Like the Marxist-Leninists, the arch-liberal Jacobins, or any other group in history seeking cultural dominance, they claim their values and goals are universal. That means that viewpoints that don’t pay obeisance to their dogma are non-valid and have no right to exist. The ends justify the means of the neo-Jacobin terror that is cancel culture.

Losing a figure like Leo Terrell should set off alarm bells for the Democrats that their party and their election chances are lost in sophistry, divorced from reality. They threaten to do irreparable damage to America as they descend into madness.