Why Minneapolis Residents are Forming Militias

The people of Minneapolis have started forming armed neighborhood security militias on their own initiative. Since the death of George Floyd in May and the city council’s decision to abolish the police force, the breakdown in law and order has continued to threaten the security of locals’ lives and property.

The trend is not new. At the end of May, the NAACP called upon a group of black gun owners to patrol the largely African-American business district of West Broadway.

We pay high taxes and are regulated by hundreds of bureaucrats in Minneapolis. And yet crime is so bad in some communities that residents have formed civilian militias. This is the libertarian dream of the end of the state and private cops.

First militias formed in May

Whats happening in Minneapolis right now? Less police, and people are resorting to militias. If we pay for more services, it SHOULD NOT come from the police budget, unless crime GOES DOWN. Defunding police while murders are rising by double and triple digits around 🇺🇸… Lunacy.

Jamil Jackson, a leader of Minnesota Freedom Fighters, which advocates for black gun ownership, told the Journal the group kept the area free of looting or arson without firing a shot.

Jamil Jackson, the leader of the Minnesota Freedom Fighters, a local organization advocating 2nd Amendment Rights for African-Americans told reporters, “We were fired on but we weren’t going to return fire into a dark street.” The group has established a security company.

In June there were 75 shootings in Minneapolis, three times the rate at the same time last year.

The Minneapolis police have not yet been disbanded. John Elder, their spokesman, told reporters, “We have long supported neighborhood patrols. All laws must be obeyed by those engaging. We have been clear these are in supplement to the police department and not as a substitute.”

So far, the city has only agreed on a permanent cut to the police budget equivalent to about 5% of its total. The new community safety model replacing the police is expected to be introduced next May. The details and what that means have yet to be established.

City council member Alondra Cano’s aid, Grahm Faulkner told reporters, “We’re not trying to create an armed force to replace the police department. We’re trying to support the groups that are out there.”

Neighborhood barricaded itself against crime 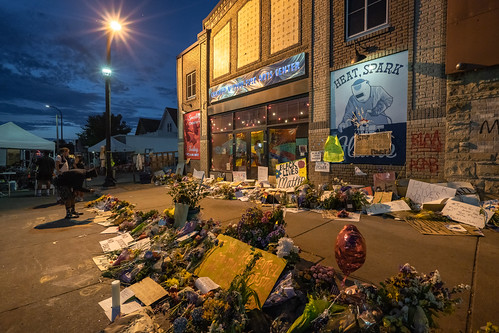 One neighborhood in Minneapolis has constructed its own barricades to protect two city blocks from crime. The barricade has evolved over time from an improvised structure to a formal wall protected by armed patrols.

Resident Tania River told reporters, “It was being done deliberately out in the open. Drive-through drug dealing, drive-through prostitution, everything from gunshots to assaults to sex out in the public. Everything you didn’t want your neighborhood to look like.”

Some residents in high-crime neighborhoods remain distrustful of police and reluctant to call them in the event of a crime.