Kristi Noem, South Dakota’s Republican leader, has said ‘no thank you’ to federal funding offered by the Trump Administration.

As noted by The Daily Wire, Kristi declined to accept the

She issued a statement Friday, saying that “despite significant [dysfunction] in Congress, President Trump continues to problem solve and provide great leadership during this recovery effort.”

South Dakota's economy, having never been shut down, has recovered nearly 80% of our job losses.

Governor Noem to federal money: thanks but no thanks

Noem said, “My administration is very grateful for the additional flexibility that this effort would have provided, but South Dakota is in the fortunate position of not needing to accept it. South Dakota’s economy has never been shut down and has recovered nearly 80% of our job losses.”

Noem impressed a lot of working people when she refused to order a pandemic-propelled lockdown, about not having shut down.

Every region is different, as many have observed. South Dakota has its challenges, but you couldn’t call it overcrowded. So in April, she stood firm amid hecklers accusing her of displaying “herd mentality.”

Noem responded, “My responsibility is to respect the rights of people, and the people who elected me. To manage our state operations in a way that reflects the realities of what we have here on the ground in our state. On the foundation of my principles, commonsense conservative values, and the principles that we hold dear in America, the facts, the science, and the data will guide our decision-making here in South Dakota.”

She continued, “The calls to apply a one-size-fits all approach to this problem in South Dakota is herd mentality, not leadership.” 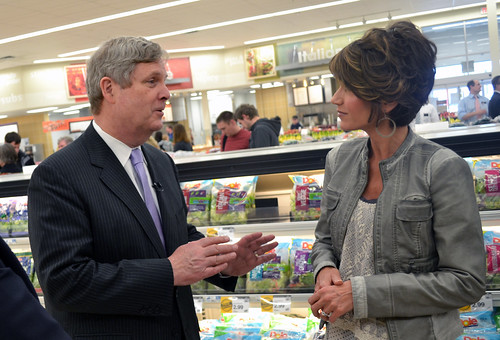 According to Noem, “Our Constitution ensures the citizen’s right is protected. I agree with the role of our government as set forth in our state and in our national constitution. I took an oath to uphold these constitutions. … The people themselves are primarily responsible for their safety. They are the ones that are entrusted with expansive freedoms – they’re free to exercise their rights to work, to worship, and to play – or to even stay at home, or to conduct social distancing.”

Noem went on to describe the state’s labor market, saying, “South Dakota is the only state in the nation that didn’t have extended benefits kick in because our insured unemployment rate has been the lowest in the nation. We have the third best housing construction market in the country. And many, many businesses are looking to relocate to South Dakota because of the decisions we made during the pandemic . . . South Dakota is open for business — that applies to our business owners and their employees . . . For those still needing help with unemployment benefits, please visit dlr.sd.gov.”