President Trump just scored a million extra votes in November. On Wednesday, The National Association of Police Organizations (NAPO) endorsed President Trump thanks to his “steadfast and very public support” for the nation’s police forces.

NAPO has endorsed President Trump in his reelection campaign. Here is our endorsement letter which was issued following today's meeting. pic.twitter.com/mf6ZUTf10l

The National Association of Police Organizations endorses Trump 2020 but zero mention on @NBCNews, @CBSNews, @ABC, @CNN. This is major news as NAPO had endorsed Obama/Biden in 2008 and 2012 & didn't endorse in 2016. #biasedmedia

Michael McHale, the president of The NAPO, said that President Trump’s unwavering support for law enforcement is needed “during this time of unfair and inaccurate opprobrium being directed at our members by so many.”

McHale wrote a letter to Trump saying “We particularly value your directing the Attorney General to aggressively prosecute those who attack our officers.”

The NAPO represents more than 1,000 police associations and 241,000 officers. President Trump held a meeting with representatives of the organization on Monday.

Trump has taken up the banner of being the law and order candidate. During his meeting with the NAPO on Monday, Trump successfully made his case for why he deserves their endorsement.

Trump observed that “Our officers have been under vicious assault, reckless politicians have defamed our heroes as the enemy . . . These radical politicians want to defund and abolish the police . . . My administration is pro-safety, pro-police, and anti-crime.”

Biden panders to the anti-police Democratic Party base 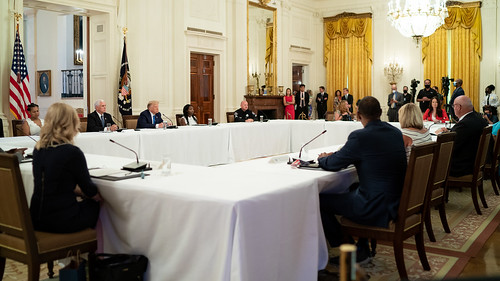 Police officers have experienced widespread disparagement after the nationwide protests and riots over racial injustice. Although Joe Biden was the main force behind the harsh 1994 crime bill, he has recently pivoted to supporting the defund the police movement.

Biden has told the media that police forces don’t need military-style equipment and weapons, claiming that it would lead them to “become the enemy” in their communities.

One of Biden’s campaign officials has said that policing faces “the urgent need for reform,” which somehow involves “funding for public schools, summer programs, and mental health and substance abuse treatment separate from funding for policing — so that officers can focus on the job of policing.”

The Biden campaign is touting the candidate’s election promises which includes an extra $300 million in funding for ‘community policing.’ A Biden campaign representative argues that the plan will “improve relationships between officers and residents” and “provide the training that is needed to avert tragic, unjustifiable deaths.”

Paul Digiacomo, president of the Detective Endowment Association, told media that “Joe Biden was a very strong supporter of them years ago, and he’s been kidnapped now by the anti-police rhetoric. There’s a big question amongst our members if Joe Biden is going to stand up and support the police.”