“Donald Trump has our back. President Trump has supported us when so many people have turned against us,” NYS Troopers PBA president Thomas Mungeer told the Post on the eve of the Republican National Convention.

“Joe Biden supported cops in the past, but he’s turned his back on us,” Mungeer said, referring to the former vice president and Democratic presidential candidate who is fighting Trump in the November 3 general election.

Police Unions are breaking away from @JoeBiden

“'Donald Trump has our back. President Trump has supported us when so many people have turned against us,' NYS Troopers PBA president Thomas Mungeer told the Post

'Joe Biden supported cops in the past but he’s turned his back on us,' said Mungeer" pic.twitter.com/czBiWHULZG

Trump’s endorsement by Mungeer comes just ten days after Patrick Lynch, president of New York City PBA, personally threw his union’s support behind Trump at an event with the president at his Bedminster, N.J. golf club.

The bottom line, Mungeer said, is that on criminal justice issues, Democrats have swung too far to the left – bending toward criminal offenders at the detriment of cops and law-abiding people.

He said the anti-law enforcement change started before the demonstrations and violence that erupted after George Floyd’s police brutality death in Minneapolis but has escalated ever since, even within the Democratic Party. Last week at the Democratic National Convention, the latest jump in crime in New York and other metropolitan areas was not directly addressed.

“Biden has taken anti-police stands that pander to his base,” Mungeer said.

In particular, he cited one issue which separates Trump from Biden.

Trump supports the protection of qualified immunity, the doctrine which prohibits police officers from being sued for wrongdoing civilly. Biden has said he wants to amend the practice of immunity.

“No one is going to want to become a cop if he faces frivolous lawsuits,” Mungeer said.

“We don’t agree with what happened in Minnesota,” Mungeer said, “and we don’t want bad cops on the force.”

Democrats have been shifting away from law & order for years 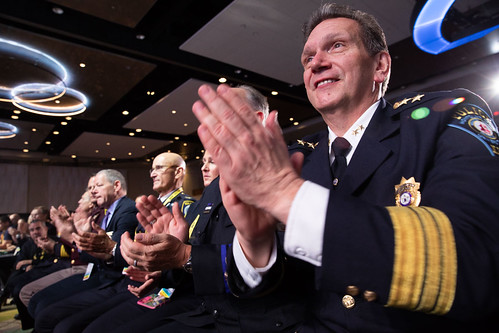 But Mungeer said taking one terrible incident and transforming it into a broader “anti-police” campaign and demonizing all the cops as criminals is misguided.

“We were all grouped together as bad,” he said.

He argued actions taken by Democratic politicians in New York have hindered or slighted law enforcement, particularly citing the bail reform legislation in New York that came into effect earlier this year. He also noted more convicted murderers are being released by the Cuomo-appointed Parole Board, including cop killers.

“My members have been seriously handcuffed from doing their jobs,” Mungeeer said.

“It is the people who are going to suffer—the people who need us the most. The silent majority supports law enforcement, but they’ve been silent for too long,” he said.

Mungeer has been critical of the treatment of criminal justice problems by Democratic leaders in Albany and City Hall.

He said that he had maintained a “decent relationship” with Cuomo over contractual matters. In June, he sent a letter to the governor, arguing that Cuomo gave “zero support” by refusing to resolve threats aimed at troopers during the early demonstrations following Floyd’s death.

The NYS Troopers Police Benevolent Organization has also sued New York City for adopting a controversial new law that would criminalize cops kneeling on the back of a suspect. Mungeer had previously called for eliminating the 200 State Police Officers assigned to city detail after calling the local law an “ill-conceived, knee-jerk reaction by lawmakers.”